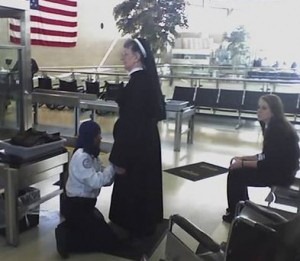 Now here is a frightening story, as political correctness allows Muslims to screen bags and people at our airports. A Muslim airport security screener at Los Angeles airport (LAX)  was charged with making terrorist threats, and authorities were scrutinizing a website linked to the Muslim that contains letters criticizing America as evil and promising something more devastating than the 9/11 attacks.

This is the guy that screen our bags, lucky so far he did not allow a Muslim to enter a jetliner with  a bag full of explosives, the question how many more Muslims work in the TSA?  What next, Neo-Nazis guarding Jewish Synagogues, wolves guarding the hen house?

His letters were posted on a website  operated by Nna Alpha Onuoha, 29, originally from Nigeria, who was arrested late Tuesday, hours after he quit his Transportation Security Administration job at Los Angeles International Airport.

Onuoha was charged Wednesday with one count each of making a terrorist threat and making threats affecting interstate commerce. If convicted, he faces up to 15 years in prison.

The threats prompted a brief shutdown of parts of LAX on Tuesday, and packages mailed to a TSA office and a staffer at an apartment complex for military veterans near the airport where Onuoha lives brought brief evacuations at both places until it was determined the packages contained only papers, airport and Inglewood police said.

In one posting attributed to Onuoha, he said a message would be released Sept. 11 and America “will be reduced to nothing.”

That passage is part of a lengthy letter apparently written to the father of a 15-year-old girl whose treatment by Onuoha during screening at LAX in June led the TSA to suspend him. Onuoha was upset by the girl’s attire and said, “You’re only 15, cover yourself.”

The incident drew attention when the girl’s father, Mark Frauenfelder, wrote about it on boingboing, the blog he founded. He said his daughter was humiliated and shamed. He posted a photo of her in the outfit, modest by modern standards, and said he had complained to TSA.

A federal official confirmed the incident was the reason Onuoha was suspended for a week in July. The official spoke on condition of anonymity because he wasn’t authorized to talk about the case publicly. 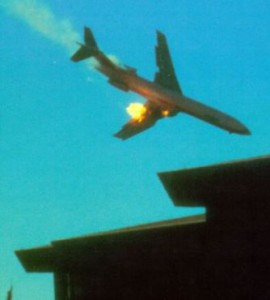 The letter apparently meant for Frauenfelder was dated Aug. 25. In it, Onuoha was unapologetic.

“If you need an example on how to properly dress your fifteen year old daughter before you send her out on a world tour in this world ruled by satan, you should look up to Muslim women,” the letter said.

An email message to Frauenfelder was not immediately returned but he told KCAL-TV that his daughter is a “little freaked out” by the postings.
“It sounds like the work of a disturbed mind, definitely. I’m glad he’s in custody,” Frauenfelder said.

He showed up at LAX on Tuesday afternoon, resigned from his job and returned several hours later to leave a package at TSA’s airport headquarters that was addressed to a manager.

A bomb squad found no explosives or harmful contents in the package but discovered an eight-page letter in which Onuoha expressed disdain for the U.S. and referenced the event that led to his suspension, Eimiller said.

Later Tuesday, a man believed to be Onuoha made two phone calls to TSA saying certain airport terminals should be evacuated, Eimiller said. During one call, the man told an employee he would “be watching” to see if authorities evacuated the terminals as instructed.

Onuoha was arrested in Riverside, about 65 miles (105 kilometers) from his home. The church parking lot where his minivan was parked was cleared and a bomb squad robot conducted a search in and around the vehicle.

Will Unions Want to Repeal Obamacare?

In a typical Friday afternoon “news dump,” the Treasury Department announced it could not grant unions’ request for another special...