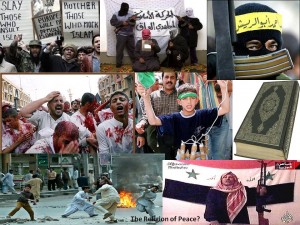 Psychopathic people and behaviour are found within all cultures and religions. But one tops them all — by many lengths. The daily mass killings, terror, persecutions and family executions committed by the followers of Islam are nauseating, and the ingenuity behind the attacks — always looking for new and more effective ways of killing and terrorising people — is astonishing: hijacking jumbo jets and flying them into skyscrapers, hunting unarmed and innocent people with grenades and automatic rifles in shopping malls, planting bombs in one’s own body, using model airplanes as drones, attaching large rotating blades to pickup trucks and using them as human lawn movers, killing family members with acid or fire, hanging people publicly from cranes in front of cheering crowds, etc. It makes one ask oneself: what creates such lack of empathy and almost playful and creative attitude towards murdering perceived enemies?

Nobody is born a mass murderer, a rapist or a violent criminal. So what is it in the Muslim culture that influence their children in a way that make so relatively many Muslims harm other people?

As a psychologist in a Danish youth prison, I had a unique chance to study the mentality of Muslims. 70 percent of youth offenders in Denmark have a Muslim background. I was able to compare them with non-Muslim clients from the same age group with more or less the same social background. I came to the conclusion that Islam and Muslim culture have certain psychological mechanisms that harm people’s development and increase criminal behaviour.

I am, of course, aware that Muslims are different, and not all Muslims follow the Quran’s violent and perverted message and their prophet’s equally embarrassing example. But as with all other religions, Islam also influences its followers and the culture they live in.

One could talk about two groups of psychological mechanisms, that both singly and combined increase violent behaviour. One group is mainly connected with religion, which aims at indoctrinating Islamic values in children as early as possible and with whatever means necessary, including violence and intimidation. One can understand a Muslim parent’s concern about his offspring’s religious choices, because the sharia orders the death penalty for their children, should they pick another religion than their parents. The other group of mechanisms are more cultural and psychological. These cultural psychological mechanisms are a natural consequence of being influenced by a religion like Islam and stemming from a 1,400 year old tribal society with very limited freedom to develop beyond what the religion allows.

Classical brainwashing methods in the upbringing

Brainwashing people into believing or doing things against their own human nature — such as hating or even killing innocents they do not even know — is traditionally done by combining two things: pain and repetition. The conscious infliction of psychological and physical suffering breaks down the person’s resistance to the constantly repeated message.

Totalitarian regimes use this method to reform political dissidents. Armies in less civilized countries use it to create ruthless soldiers, and religious sects all over the world use it to fanaticize their followers.

During numerous sessions with more than a hundred Muslim clients, I found that violence and repetition of religious messages are prevalent in Muslim families.

Muslim culture simply does not have the same degree of understanding of human development as in civilized societies, and physical pain and threats are therefore often the preferred tool to raise children. This is why so many Muslim girls grow up to accept violence in their marriage, and why Muslim boys grow up to learn that violence is acceptable. And it is the main reason why nine out of ten children removed from their parents by authorities in Copenhagen are from immigrant families. The Muslim tradition of using pain and intimidation as part of disciplining children are also widely used in Muslim schools — also in the West.

Combined with countless repetitions of Quranic verses in Islamic schools and families, all this makes it very difficult for children to defend themselves against being indoctrinated to follow the Quran, even if it is against secular laws, logic, and the most basic understanding of compassion.

And as we know from so many psychological studies, whatever a child is strongly influenced by at that age takes an enormous personal effort to change later in life. It is no wonder that Muslims in general, in spite of Islam’s inhumane nature and obvious inability to equip its followers with humor, compassion and other attractive qualities, are stronger in their faith than any other religious group.

Not only does a traditional Islamic upbringing resemble classical brainwashing methods, but also, the culture it generates cultivates four psychological characteristics that further enable and increase violent behaviour.

These four mental factors are anger, self-confidence, responsibility for oneself and intolerance.

When it comes to anger, Western societies widely agree that it is a sign of weakness. Uncontrolled explosions of this unpleasant feeling are maybe the fastest way of losing face, especially in Northern countries, and though angry people may be feared, they are never respected. In Muslim culture, anger is much more accepted, and being able to intimidate people is seen as strength and source of social status. We even see ethnic Muslim groups or countries proudly declare whole days of anger, and use expressions such as “holy anger” — a term that seems contradictory in peaceful cultures.

In Western societies, the ability to handle criticism constructively if it is justified, and with a shrug if it is misguided, is seen as an expression of self-confidence and authenticity. As everyone has noticed, this is not the case among Muslims. Here criticism, no matter how true, is seen as an attack on one’s honor, and it is expected that the honor is restored by using whatever means necessary to silence the opponent. Muslims almost never attempt to counter criticism with logical arguments; instead, they try to silence the criticism by pretending to offended or by name-calling, or by threatening or even killing the messenger.

The third psychological factor concerns responsibility for oneself, and here the psychological phenomenon “locus of control” plays a major role. People raised by Western standards generally have an inner locus of control, meaning that they experience their lives as governed by inner factors, such as one’s own choices, world view, ways of handling emotions and situation, etc. Muslims are raised to experience their lives as being controlled from the outside. Everything happens “insha’ Allah” — if Allah wills — and the many religious laws, traditions and powerful male authorities leave little room for individual responsibility. This is the cause for the embarrassing and world-famous Muslim victim mentality, where everybody else is blamed and to be punished for the Muslims’ own self-created situation.

Finally, the fourth psychological factor making Muslims vulnerable to the violent message in the Quran concerns tolerance. While Western societies in general define a good person as being open and tolerant, Muslims are told that they are superior to non-Muslims, destined to dominate non-Muslims, and that they must distance themselves socially and emotionally from non-Muslims. The many hateful and dehumanising verses in the Quran and the Hadiths against non-Muslims closely resemble the psychological propaganda that leaders use against their own people in order to prepare them mentally for fighting and killing the enemy. Killing another person is easier if you hate him and do not perceive him as fully human.

The cultural and psychological cocktail of anger, low self-esteem, victim mentality, a willingness to be blindly guided by outer authorities, and an aggressive and discriminatory view toward non-Muslims, forced upon Muslims through pain, intimidation and mind-numbing repetitions of the Quran’s almost countless verses promoting hate and violence against non-Muslims, is the reason why Islam creates monsters.

The psychological problem within Islam

The problem with Islam and Muslim culture is that there are so many psychological factors pushing its followers towards a violent attitude against non-Muslims that a general violent clash is — at least from a psychological perspective — inevitable. With such strong pressure and such strong emotions within such a large group of people — all pitched against us — we are facing the perfect storm, and I see no possibilities of turning it around. For people to change, they have to want it, to be allowed to change, and to be able to change — and only a tiny minority of Muslims have such lucky conditions.

Far too many people underestimate the power of psychology embedded in religion and culture. As we have already seen, no army of social workers, generous welfare states, sweet-talking politicians, politically correct journalists or democracy-promoting soldiers can stop these enormous forces. Sensible laws on immigration and Islamisation in our own countries can limit the amount of suffering, but based on my education and professional experience as a psychologist for Muslims, I estimate that we will not be able to deflect or avoid this many-sided, aggressive movement against our culture.

I do believe that we, as a democratic and educated society become focused and organised concerning the preservation of our values and constitutions, can win this ongoing conflict started by the often inbred followers of sharia. The big question is how much of our dignity, our civil rights, and our blood, sweat and tears will we lose in the process.

Newscom During remarks given after the passage of the Senate continuing resolution today, President Obama stressed once again his unwillingness...