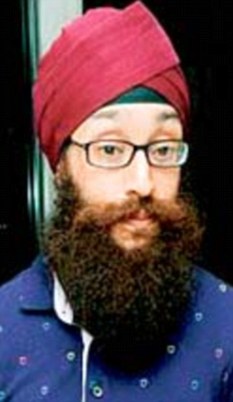 Professor Prabhjot Singh, 31, was punched in the face around three times
A Sikh professor at Columbia University in the US has been attacked and injured by a mob of up to 30 people, who called him ‘Osama’ and ‘terrorist’ during a brutal assault which the police are investigating as a hate crime.

School of International and Public Affairs professor Prabhjot Singh was assaulted on Saturday night while walking in the Harlem neighbourhood.

There was a group of 25 to 30 young men. One of them said, “Get him, Osama,” 31-year-old Singh, who suffered a fractured jaw, was quoted as saying by the New York Daily News.

“I got punched directly in the face about three times,” Singh said, adding that he was on the ground being kicked when passersby intervened, saving him.

“I’m grateful to them,” said Singh, who is married and has a young son.

It could have been a lot worse. Singh had returned from dinner, dropping his wife and one-year-old son at home before going for a walk.

While being attacked, he saw one of the assailants put his arm inside his coat as if reaching for a gun. He was unable to provide any descriptions about his assailants to police.

Singh said his assailants taunted him and beat him, calling him ‘Osama’ and ‘terrorist’ as they pulled at his long beard.

“It’s incredibly sad,” Singh said. “It’s important that they are caught and be held responsible,” he said.

Rene Mattes/ZUMAPRESS/Newscom Storming the beaches of Normandy was the real battle. But World War II veterans proved today that they...