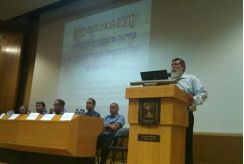 Lipman met with Haimovich to discuss the possibility of a Meatless Mondays Knesset Lobby, which would promote vegetarianism, or simply a reduction in meat consumption, in order to limit environmental damage and boost human health.

The two discussed United Nations data on meat consumption which states the worldwide meat industry is responsible for 18% of the increase in greenhouse gases, and that the industry uses huge amounts of water and leads to deforestation.

Overconsumption of meat was blamed for high cholesterol and overweight.

Lipman said his goal is to meet with fellow MKs and think of ways to increase awareness of the downsides of meat consumption. In addition, he hopes to add more vegetarian options to the menu at the Knesset cafeteria.

Lipman said, “I decided to establish the ‘Meatless Mondays’ Lobby out of a long-term view and an understanding that we must act to protect the environment. As we all know, the earth’s resources are limited, and so we must protect them for the generations to come.”

“One day without meat may not sound like much, but together we can make a significant difference,” he declared.

Canada’s Foreign Minister, John Baird, reiterated on Monday his country’s commitment to Israel’s security. In a speech to the United...