Just before the weekend, the National Park Service informed charter boat captains in Florida that the Florida Bay was “closed” due to the shutdown. Until government funding is restored, the fishing boats are prohibited from taking anglers into 1,100 square-miles of open ocean. Fishing is also prohibited at Biscayne National Park during the shutdown. 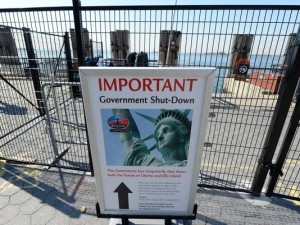 The Park Service will also have rangers on duty to police the ban. Of access to an ocean. The government will use more personnel and spend more resources to attempt to close the ocean, than it would in its normal course of business.

This is Obama governing by temper-tantrum. It is on par with Obama’s ham-fisted attempts to close the DC WWII Memorial, an open-air public monument that is normally accessible 24 hours a day. By accessible I mean, you walk up to it. When you have finished reflecting, you then walk away for it. Obama ordered barriers to keep the American citizens out in a political move.

The Memorial is an actual structure, with some kind of perimeter that can be fenced off. Florida Bay is the ocean. How, pray tell, do you “close” 1,100 square miles of ocean? Why would one even need to do so?
Apparently, according to an anonymous Park Service ranger, “We’ve been told by the Obama administration to make life as difficult for citizens as we can. It’s disgusting.”

Centuries ago, King Canute famously failed to command the ocean tide to stop. His display was actually a means to educate his subjects on the limits of royal power. Today, however, our pathetic President actually believes he has the power to control the oceans.

Behind the Scenes with Margaret Thatcher

It has been almost 23 years since Lady Margaret Thatcher left 10 Downing Street and more than 10 years since...