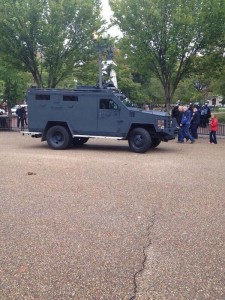 WASHINGTON – Thousands of people converged on the World War II Memorial on the National Mall on Sunday morning and tore down the barricades blocking it off, protesting the closure of the memorial during the federal government shutdown, Obama was blocking everybody out but allowed an Illegal Alien rally there last week.

Beginning at about 9:30 a.m., Sens. Mike Lee, R-Utah, and Ted Cruz, R-Texas, as well as former Alaska Gov. Sarah Palin, were among the luminaries in a crowd that chanted “Tear down these walls!” and sang “God Bless America” as well as other patriotic songs as they entered the memorial, which has been closed since the government shutdown that began Oct. 1.

Tractor-trailers headed down 17th Street toward the Mall, blaring their horns. The Metropolitan Police Department blocked off the street, prompting the crowd to head up the street, shouting at the police to move their vehicles.

Palin said that closing the memorials was disgraceful, and that President Obama “could be here today, saying ‘Yes, we can tear down these barricades.”

Cruz said that President Obama was using veterans as political pawns in the shutdown. Lee shouted, “The sons and daughters of the United States of America are meant to live in liberty.” 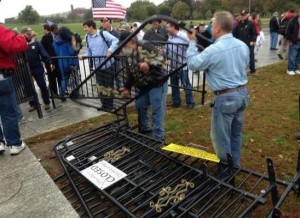 One man on the scene said the Whitehouse ordered snipers and he could see them on the buildings pointing rifles toward the crowd.  He confronted the police  and asked them how they could work for Obama and do this to Americans.

When our corrupt administration decided to use the veterans as their pawns, they made a mistake. These people don’t owe their lives to Obama and his goons.

“The tree of liberty must be refreshed from time to time with the blood of patriots and tyrants.”
— Thomas Jefferson

House Cloakroom Analysis: Over the past several weeks, the House passed several bills to fund the entire government while defunding/delaying/undermining Obamacare and...