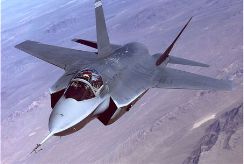 He said in a statement that Elbit Systems and its US partner Rockwell Collins have been chosen by the Pentagon and F35 manufacturer Lockheed Martin to supply helmets for the next generation of the Joint Strike Fighter, the hi-tech warplane that is supposed to serve as the backbone of future American air power.

“I congratulate Elbit Systems on becoming a partner in this global flagship project to produce the world’s most advanced warplane,” Yaalon said.

Elbit Systems designed the helmet for the fighter, and its selection comes after early doubts following bugs in its early designs.

Israeli state-owned Israel Military Industries is already part of the F-35 project, for which it manufactures aircraft parts.

Yaalon lauded the significant involvement of Israeli developers in the production of the F-35, which Israel plans to introduce into its own airforce in the coming years.

“The choice of Elbit Systems to produce the pilots’ helmets is a vote of confidence in Israel’s defense industries and their people,” he added.

Israeli daily Yediot Aharanot said that Israel has so far ordered 19 of the aircraft and intends to buy more.

“The new helmet, which is to be manufactured in the United States, is capable of putting flight data as well as data about weapons systems and intelligence before the pilot’s eyes,” it said, adding that it would be delivered as standard with every F-35 purchased around the world from 2016.

“With the Israel Air Force planning to decommission its fleet of ageing F-15s and F-16s, the F-35 will continue to ensure the country’s global competitiveness,” according to Lockheed Martin’s website.

The aircraft, which comes in conventional, vertical takeoff and aircraft carrier versions, has struggled with production delays and cost overruns.

Designed to replace fighters in the US Air Force, Navy and Marines and supported by a consortium of eight countries, the programme is already the most expensive in US military history with a price tag of $395.7 billion (292.2 billion euros).

(CNSNews.com) - Attorney and Harvard Law Professor Alan Dershowitz, who describes himself as a liberal Democrat, says he's disgusted by...