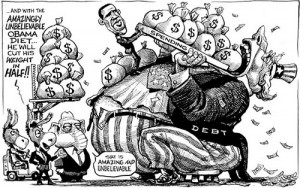 This president having no shame, and dong what he pleases to fast-track the United States into bankruptcy  Obama pathetically spend so much on Thursday that on that day alone the debt increased by some $300 billion dollars. It was the first day the federal government was able to borrow money.

Obama wasted no time in going back to his reckless spending habits, shattering the previous high of $238 billion set two years ago also while Obama was president.  Seems this man cannot wait to destroy this country as fast as he can. It’s a act of treason!

Usually Congress sets a borrowing limit, or debt ceiling, that caps the total amount the government can be in the red. But not under the ridiculous terms of this week’s deal, Congress set a deadline date instead of a dollar

cap. That means debt can rise as much as Mr. Obama wants it to, until the Feb. 7 deadline, they literally gave Obama blank checks.  This is a huge mistake on the GOP’s part to allow this insanity.

Judging by Obama reckless behavior over the past five months, that could end up meaning Congress just granted Mr. Obama a debt increase of $700 billion or more possibly into the trillions and just within a few months.  Their will be almost no way the country will ever recover from this outright recklessness!

Republicans initially sought to attach strings to the debt increase, but they surrendered last week the the Democratic senate wrote a bill that also  included a bribe to the Republican minority leader of $3 million to McConnell.  The GOP gave in under pressure from the left, Obama refusal to negotiate and the media attacking and blaming the GOP for the shutdown.

The media was so biased some low information liberals thought the shutdown was caused by George Bush.  The Zombies in the left believe everything that Obama and the leftist media tells them, lucky for them they are not in Guyana being told to drink the Obama cool-aid, because they would without question!  If you think Obama shattering records creating 300 Billion in debt in one day is a bad thing, you might be called a racist by the insane left, they will say anything to badger Americans into submitting to them and destroying this once great country.

Now instead of any spending limits Obama has an open checkbook until Feb 7th and that is a very dangerous situation, this is the worst scenario that happened and why the GOP allowed such insanity to happen is mind boggling. 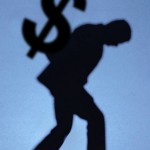 Obama and the Democrats were insisted that the debt increase be “clean,” meaning without any strings attached.  In the end it the American taxpayers that loose, this is your money and debt they are adding to your tax bill that very well may have to be passed on to your children and possible their children.

The progressives continue to astonish, if they would have the courage to read or maybe study true history you will find that the philosophy that they believe in has never worked and never will.    All people are created equal in the sense of humanity however we are not all created with the same intelligence, ambitions, patience, and love that is needed to justify your feelings.

But, if it makes liberals to feel good to be jealous of those who have more than them, perhaps they should try a little harder to follow in their footsteps instead of sitting by and waiting for the government to fund their lives.   I truly feel pity for all of the liberals who feel that the world owes them everything.

Obama Said This with a Straight Face

“Thousands of people are signing up and saving money as we speak.” Yes, President Obama actually said that yesterday about...