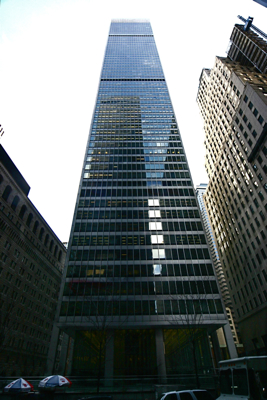 China’s developers and companies are expanding in overseas property markets as the government maintains curbs on housing at home to cool prices. Greenland Holding Group Co., a Shanghai-based, state-owned developer, this month agreed to buy a 70 percent stake in a residential and commercial real estate project in Brooklyn.

The landmark 1 Chase Manhattan Plaza, designed by architect Gordon Bunshaft and built in the 1950s, was once the headquarters of Chase Manhattan Bank. Rockefeller, as head of the bank’s building committee, selected the site and oversaw its construction.

Fosun, which invests in properties, pharmaceuticals and steel, is buying the 60-story, 2.2 million square-foot, lower Manhattan tower, according to a statement it filed to Hong Kong’s stock exchange.Fosun, owned by Chinese billionaire Guo Guangchang, fell 0.3 percent to HK$6.79 at the midday trading break in Hong Kong.

Posted in Financial and tagged China, Communism, Made in China, New York.

With the end of the government shutdown last week, President Obama is trying to pivot back to immigration in the...