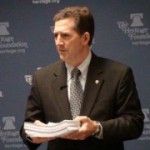 Recognized as “one of the conservative movement’s marquee annual events” by CNN, the eighth annual Values Voter Summit on October 11-13 brought together more than 1,900 leaders, activists and families for three days of inspiring speeches and interactive breakout sessions to strategize for the future.

While the entire conference features many highlights from leading conservative voices, a few takeaway messages stand out from the three-day event:

1. Young Adults Haven’t Rejected the Case for Marriage, They Simply Haven’t Heard It

Why does upholding marriage matter? Many leaders, including Heritage President Jim DeMint (see final video below), provided insights on this issue—and no speaker more so than Heritage expert Ryan T. Anderson, who addressed marriage in three Values Voter Summit sessions as well as media interviews.

As he has seen in speaking at college campuses across America, Anderson found that:

Even the people on the other side will come up afterwards and say to me, ‘We’ve never heard a rational case for marriage.’ The students on our side say, ‘You know, I’ve always known it because the Bible says so, or the church taught me that, but now you’ve given me a philosophical and social science way of thinking about marriage. You’ve given me a vocabulary in which to talk to my secular classmates about marriage.’

Woe to the heckler who rises to challenge Sen. Ted Cruz.

The Texas senator — champion debater at Princeton and veteran of Supreme Court oral arguments — cannot be flapped, daunted or deterred. The dozen or so protesters who infiltrated his speech Friday at the Values Voter Summit learned that the hard way.

The supply of protesters ran out before Cruz’s stash of comebacks.

(Incidentally, Cruz will discuss one of his previous Supreme Court oral arguments at a Heritage Foundation event next week.)

3. Love is Still the Greatest Virtue

Love unites people from all walks of life. I’m not talking about mushy, bleeding-heart gibberish.

I’m talking about love in the sense that Edmund Burke understood it, love that begins with the ‘little platoons’ in our lives: love of family, church and community that Burke called the first link in a series of relationships that create our love of country and of mankind.

This is the indispensable love of a free and self-governing people.

DeMint’s remarks served as a preview of his new book “Falling in Love with America Again,” set to release in March 2014.

4. One Soft-Spoken Doctor Telling the Truth Creates a Forceful Impact

In his address to the Values Voter Summit, Dr. Ben Carson spoke from his decades of medical experience to reveal the disaster that is Obamacare—including how the new law fails to protect the sanctity of human life.

His remarks made waves in the media, much as he did following his speech at the National Prayer Breakfast earlier this year. The exclusive Heritage interview with Dr. Ben Carson (above) is one of our most-watched videos this month.

5. Americans Should Stand Up for Persecuted Believers Worldwide

Senator Rand Paul (R-KY) used his speech to shine a spotlight on those too often forgotten: persecuted believers around the world.

Echoing the voices of Heritage scholars and more than 626,000 petitioners, Senator Paul issued a clear call for the U.S. government’s active involvement in the release of American citizen Saeed Abedini from an Iranian prison:

In Iran, American pastor Saeed Abedini is detained indefinitely, facing physical and psychological torture. They ask him to renounce his faith. I’ve introduced a resolution to the Senate that says and calls for and says we should do everything within our power, within our voice, from the White House, from the State Department, from our government to release Saeed Abedini.

Early conference details for Values Voter Summit 2014 (set for September 26-28, 2014) are expected to be announced next spring.

Islam: Against All Mankind

When Islam’s founder Muhammad, the very first Muslim immigrant, arrived at Yathrib, or Medina, he and his followers began military...