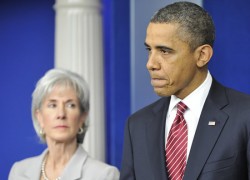 That’s the whole point of the law. You must buy government-approved health insurance, and the bureaucrats will tell you what it must cover.

But President Obama and Health and Human Services Secretary Kathleen Sebelius are now denying this.

Yesterday, they both came out publicly to tell America that it’s not Obamacare that’s causing you to receive a cancellation notice—it’s your insurance company.

Obama called insurance plans that are getting canceled “substandard” and said people could actually keep those plans if insurers still offered them (which they can’t under the President’s health care law). He said those plans are getting canceled only if “insurers decided to downgrade or cancel these substandard plans” (which they must under the law).

See stories from Foundry readers about their plans getting canceled

But guess what? If your plan is canceled, Obamacare will bring you a “better deal,” the President said.

The bread and butter of Obamacare is transforming health insurance, forcing Americans to buy a government-mandated product, and dictating what health care must look like.

Yet Sebelius said “This isn’t a government takeover of anything.”

President Obama accused Obamacare’s critics of leaving out information. But we just have to quote his words back to him on this blatant denial of Obamacare’s effects: “If you leave that stuff out, you’re being grossly misleading to say the least.”

Tell your friends to sign up for the Morning Bell so they won’t miss the details of conservative ideas for doing health reform better.

(CNSNews.com) – At a first-ever Security Council meeting focused on strengthening ties between the U.N. and the Organization of Islamic...