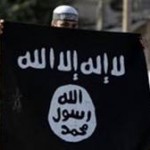 SYRIA:  Wahhabi cleric and member of the  Obama-backed “moderate” “Free Syrian Army” (FSA), Omar Gharba’ , is seen carrying the statue of the Virgin Mary in Yaaqoubiya in Syria’s Idlib province after it was taken over by militants and breaking it by throwing it on the ground after stating that he and his fellow Wahhabis won’t tolerate any form of worship except strict Wahhabism of Saudi Arabia.

Not a word of condemnation by the Muslim world. Silence equals complicity.