A video apparently showing the brutal beating of a migrant worker in Saudi Arabia has gone viral, and once again shone a spotlight on the issue of human rights violations in the gulf kingdom. 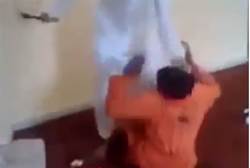 The victim – who the publisher of the video claims is an Indian national – can be seen pleading for his life as his Arab employer accuses him of looking at his wife. Despite his repeated denials, the victim is then subjected to a horrific and sustained beating. His employer then chillingly asks him “do you want to die?” immediately before the camera stops recording.

It is a disturbing illustration of a phenomenon that rights groups say is all too common in Saudi Arabia and other Arab states in the Middle East. Migrant workers have few, if any rights and no means of representation, leaving them entirely at the mercy of their employers. They are even required to surrender their passports upon arrival, leaving them trapped and helpless, often under conditions akin to slavery.

According to a CNN report, the Saudi government-sponsored “Human Rights Commission” has said it has launched an official investigation into the incident, and that it is attempting to locate the victim to offer help. The group has also called on his attacker to be arrested and tried.

But even if justice is served in this case, there will be plenty of skepticism over the Saudi government’s commitment to human rights – and particularly minority rights – in general.

A recent report by Amnesty International slammed the worsening state of human rights abuses in the country. Among the myriad criticisms levelled in the report, it was noted that migrant workers and other minorities regularly suffer abuse and “excessive use of force” at the hands of authorities.

The Palestinian Authority’s team for negotiations with Israel resigned on Thursday, the Ma’an news agency reports. According to the report,...