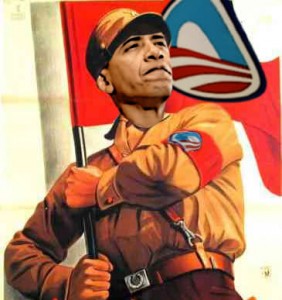 There are a number of ways that the Middle Class is being systematically destroyed in America. It has often been said that the Democratic Party is the party of Big Unions, Big Business, and Big Government (the exact formula used by the NAZIS to take over Germany in 1933). By championing increasing regulations and the Unionization of the labor force to excessive degrees the Democratic party is destroying small businesses which can not compete with large businesses under those conditions.

The Obama administration, then following their mantra of “never let a crisis go to waste,” (since each crisis is an opportunity to do “big” things—i.e. expand the size of government) responded by requiring every single chicken farmer in the U.S., large or small, to pay for expensive periodic inspections of their facilities and fill out numerous forms requiring extra man-hours. Obviously, the small mom and pop chicken farms, already operating on thin margins, could not even begin to cope with these new regulations. They were all forced to sell out to the big business mega-farms, thus reducing competition and increasing the wealth and power of the mega-farms most of which treat the chickens very inhumanely, cutting off their beaks and force feeding them hormones through tubes that go directly into their throats.

THE DESTRUCTION OF SMALL BUSINESS

What we have to bear in mind through all of this is that historically small businesses used to provide 80% of the jobs in America, so if you can kill off our small businesses you can essentially kill off the American Middle class. Prior to Obama taking office the U.S. was ranked number 3 in the world for countries where it is easy to start up a business. Now we are ranked number 13. This cratering of opportunity in America is a direct result of Obama’s anti-small business campaign, Obamacare, and the hundreds of new regulations that the “unholy triumvirate” of Obama, Hairy Reed, and Nancy Pelosi have inflicted upon the U.S. economy during the two years that they had absolute control of all branches of the U.S. government.

But killing off small businesses and stifling opportunity through excessive and idiotic regulations are not the only ways an over-zealous government can destroy the Middle Class. Obama’s latest tax plan is another example. We will start by looking at his proposal to “reduce” the corporate income tax rate to 28%.

The current legal tax rate for major corporation is 35% of all AFTER EXPENSES profits. As we all know, there are a number of deductions for expenses incurred (called “loop holes” by some), as a result, some corporations during some years end up paying zero tax, while others end up paying the full legal 35%.

The bottom line is that after all of the companies who do take all of the available deductions, or “loop holes,” are factored in and averaged with the companies that pay the full legal amount, or, just a portion of, the “actual” tax rate for all major U.S. corporations averaged out, is 27%. In comparison, our major competitors pay an average of 22% annually (after deductions are averaged in). This is why American fiscal conservatives claim (and rightly so) that the U.S. tax code puts U.S.-based companies at a competitive disadvantage.

Every single tax that is levied upon a corporation is PAID BY YOU, the consumer, not by the company. Companies that pay the full “legal” rate of 35% pass on that cost to the consumer in the form of higher prices for their products. If they pay the average rate of 27%, they pass that on to the consumer. It is these higher prices brought on by our tax code (and other government regulations) that have made U.S. corporations less competitive in the world market place.

YET ANOTHER WAY TO CRUSH THE MIDDLE CLASS

“The U.S. should have gasoline prices like those of Europe,” Steven Chu, 2008. Shortly after Chu made that idiotic announcement, Obama selected him to become the new Secretary of Energy. Why? Because Obama himself wants the U.S. to have gas prices in the 8-10 dollar range just like Europe. Obama’s visible reason for this is to destroy the Oil Companies and force the entire U.S. to use so-called “green” energy sources based on his belief in the “Global Warming” hoax (there are several other essays on this site that dissect the “Global Warming” fraud).

Further evidence of Obama’s war on the middle class is the explosion in the number of Americans receiving food stamps. When Obama took office in January 2009, there were approximately 32 million Americans on food stamps; as of April 5, 2013, that numbered had swollen by nearly 50% to 47.3 million. Poor Americans already had been receiving food stamps before Obama became president; the increase came from members of the middle-class Americans that his policies had initiated into hard times.

It is well known that Obama is a disciple and practitioner of the strategy and tactics of the late revolutionary Saul Alinsky, who despised the middle class, denigrating them as “materialistic, decadent… degenerate… and corrupt.” (For a well-researched discussion of the Alinksy link, read Chapter 3 of James R. Keena’s excellent book, We’ve Been Had.)

Karl Marx was another writer whose influence on Obama is well known. Marx railed against the middle class, fulminating in The Communist Manifesto, “The middle class owner of property…must be swept out of the way and made impossible.” Elsewhere in the Manifesto, Marx called for “the violent overthrow of the bourgeoisie.”

Building on Marx’s concepts, Lenin sought the destruction of the bourgeois class and its values, recommending, as the strategy for annihilating the middle class, “grinding them between the millstones of taxation and inflation.”

Obama Executive Order for global warming that is not happening

President Obama issued an executive order Friday directing a government-wide effort to boost preparation in states and local communities for...