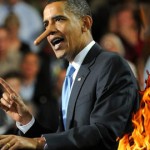 The Washington Free Beacon has put together a video record of 36 times President Obama falsely reassured the American people that under ObamaCare, if you like your insurance, you can keep your insurance.

In worse news for the White House, Fox News has also found video of Obama saying, as recently as five weeks, ago in late-September, that under ObamaCare, if you already have insurance, “you don’t have to do anything.”

Will Obama remember what Obamcare is in the coming months as its get worse, or will he make the claim he does not know anything?

In Case You Missed It:  CLOWN SHOW: Joe Biden Offers to Take Questions From Members of Democrat Caucus, But His Aides Jump In and Stop Him
Posted in Tyranny and tagged Fox News, Health Care Reform, Obama, Obamacare.

Boycott Movement in Vancouver Against SodaStream

Radical Left-wing activists demonstrated in Vancouver, Canada on Sunday in a call to boycott Israeli company SodaStream for operating in "occupied territories" and...