Civil rights attorney says Hispanic officers targeted ‘white boy’ because they ‘don’t like him living in their community. 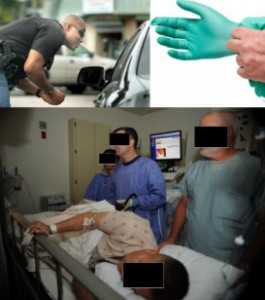 No drugs were found by police or doctors at the Gila Regional Medical Center in Silver City, N.M. The exhaustive search began when Eckert for allegedly rolling through a stop sign in Deming, N.M., on Jan. 2, 2013 in what would normally be routine traffic ticket.

Albuquerque civil rights attorney Shannon Kennedy is representing Eckert and says she is seeking “in excess of $1 million in punitive damages alone” from the law enforcement and medical personnel responsible and their employers.

The apparent justification for the search, Kennedy said, was that the Hispanic police officers claimed Eckert’s buttocks were clenched during the traffic stop.

Reality is the Hisplaic officers just didn’t like how her client looks, a white guy in the Hispanic part of town.

“Maybe the officers who did this don’t like him living in their community,” said Kennedy. “He’s a white boy, a scraggly white boy, and all these officers are Hispanic. It’s a New Mexico thing.”

Kennedy said her client, 63-years-old when he was detained, looks somewhat like rocker Tom Petty and says he denies standing with his buttocks clenched.

“I’ve never read anything like that before for probable cause,” Kennedy said.

Officers then transported Eckert to the Gila Regional Medical Center after an emergency room doctor at a Deming, N.M., hospital told them “this is unethical,” Kennedy said. The doctor who refused to comply with police is willing to testify if the lawsuit goes to trial, according to Kennedy.

It’s unclear why the colonoscopy was necessary after enemas and x-rays did not reveal hidden drugs. To add insult to injury, he was sent a $6,000 bill from the hospital for the medical procedures he involuntarily underwent, his lawyer says.

Kennedy says her client lives in fear of retaliation from Police yet wants to share his story “to protect others, to let them know this happened.”

But, she says, he also wants to guard his privacy and doesn’t want to be known as “the anally probed guy.”

Hidalgo County Sheriff Saturnino Madero did not return a U.S. News request for comment. Deming Police Chief Brandon Gigante declined to comment on the case when reached by KOB-TV on Monday, simply saying, “We follow the law in every aspect and we follow policies and protocols that we have in place.”

Kennedy filed a motion for summary judgment Oct. 24, asking the court to rule on the facts of the case, which she says are not disputed. She says defendants responded by expressing interest in resolving the case outside of court.”

In Case You Missed It:  JUST IN: House Votes 219-206 Along Party Lines to Raise Debt Ceiling Until December 3
Posted in Freedoms and tagged Freedom, hate crime, Liberalism, Racism.

The Real Costs Of A College Degree

For many citizens, the American Dream means hard work will bring about success in your career. You can comfortably...