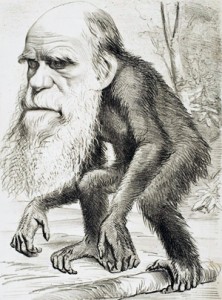 When a person believes in something very strongly, he often “sees” evidence that supports his belief, even though it does not really exist, and he pays little attention to things that contradict what he believes. Scientists are human, thus they are subject to human error. Evolutionists believe that people have evolved from apes, so they expect to find evidence to support that theory. But major questions arise. Lets weigh the evidence.

Where did man get his emotions, morals, and conscious from? The concept that we are just animals, only slightly removed from apes, means that there are no moral standards, no law worth obeying, no future, and no hope. The realization of this terrible truth penetrated the gloom of Darwin’s mind at times, “With me the horrid doubt always arises whether the convictions of man’s mind, which has been developed from the minds of lower animals are of any value or at all trustworthy. Would anyone trust in the conviction of a monkey’s mind, if there are any convictions in such a mind?” (Charles Darwin, quoted in Francis Darwin’s, Life and letters of Charles Darwin (1903), Vol. 1, page 285).

Why is man’s DNA and skeletal structure different from apes? Did man descend from apes? Our DNA is different from that of apes, monkeys and all the rest. The number of vertebrae in our backbone is different from that of apes. Our cranial (brain) capacity is totally different from the great apes. Cranial capacity is, by itself, an important test of whether a skull is from a man or an ape.”Since there are variations in tissue and fluids, the cranial capacity is never exactly equal to brain size, but it can give an approximation. A skulls capacity is determined by pouring seeds or buckshot into a large hole at the base of the skull, then emptying the pellets into a measuring jar. The volume is usually given in cubic centimeters (cc.) . Living humans have a cranial capacity from about 950 cc. to 1800 cc., with the average about 1400 cc. . Orangutans cranial capacity is 275-500 cc., Chimpanzees are 275-500 cc. and gorillas are 340-752 cc. . (R. Milner, Encyclopedia of Evolution, (1990), page 98). Other things that are different is the shape and arrangement of the teeth, and the shape and size of the feet.

Where did man’s family tree start from? Evolutionists still maintain that humans and modern apes evolved from a common ancestor that existed millions of years ago. That hypothetical common ancestor is just a phantom creature, however, for no one has ever been able to find any trace of him. Ramapithecus was thought once to be one of the earliest branches leading to man. It turned out that Ramapithecus was nothing more than an orangutan. Then there was Piltdown man who was given the official name Eoanthropus dawsoni meaning “Dawn-man” was nothing more than a hoax. He was produced from a jawbone of an ape and a skull of a modern human. Then there was Nebraska man officially named Hesperopithecus. He turned out to be nothing more than a pig’s tooth. That is right, he was produced from the discovery of a single extinct pig tooth. Then we have Ocre man produced from a donkey skull. Neanderthal man was supposed to be an ape-man, but research has found him to be quite human. The supposed evolutionary family tree of man is barren of the fossil evidence necessary to give credence to their theories.

Lord Zuckerman (Dr Solly Zuckerman), a famous British anatomist gave an important admission in his book, Beyond the Ivory Tower (1970), page 64. He says,”that if we exclude the possibility of creation, then obviously man must have evolved from an ape-like creature, but if he did, there is no evidence for it in the fossil record.”

Did God create man in the image of an ape? No! He created man in the image of God. Thus, from what the Bible says, we know that evolution cannot possibly be correct. People did not evolve from apes. God first created man by taking elements found in the dust of the ground and formed Adam. We note that Adam did not become a living person until God breathed into his nostrils the breath of life. Then God made the first women, Eve, in a very special way, by removing one of Adam’s ribs, from which he created Eve.

“And God said, Let us make man in our image, after our likeness: and let them have dominion over the fish of the sea, and over the fowl of the air, and over the cattle, and over all the earth, and over every creeping thing that creepeth upon the earth. So God created man in his own image, in the image of God created he him; male and female created he them. ” (Genesis 1:26-27) (KJV)

“And the LORD God formed man of the dust of the ground, and breathed into his nostrils the breath of life; and man became a living soul.” (Genesis 2:7) (KJV)

“And the LORD God caused a deep sleep to fall upon Adam, and he slept: and he took one of his ribs, and closed up the flesh instead thereof; And the rib, which the LORD God had taken from man, made he a women, and brought her unto the man.” (Genesis 2:21,22) (KJV)

So the preponderance of evidence points not to man evolving from a ape but that man was created by God who directly formed man to be in the image of God. And when God came to this Earth (John 1:1-4,14),(I Timothy 3:16) as the Lord Jesus Christ. He came as a man (I Timothy 2:5).

You May Also Enjoy:
To Believe Evolution, Mathematically, You Have A Greater Faith Than I

A Challenge to Darwinism

In Case You Missed It:  WATCH: President Trump Gives Another Statement Endorsing Blake Masters In AZ Senate Primary: “Mark Brnovich And Jim Lamon Will Only Let You Down.”
Posted in Freedoms and tagged Freedom.

After His Health Plan Was Canceled, The Cheapest Option Under Obamacare Was Anything but Cheap

Despite assurances from his insurance broker, and even the President, that it wouldn’t happen, John Hawkins recently learned his health...