Barack Obama’s March 2013 trip to Israel had a too-good-to-be-true feel about it. While barely pressuring on Israel, he instructed Palestinians not to set preconditions for negotiations and admonished them to “recognize that Israel will be a Jewish state.” It felt out of character, suggesting a price to be paid later. 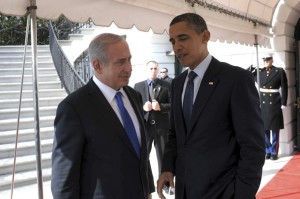 Well, that price has now, eight months later, been revealed and it has two components. If I might paraphrase the U.S. position: “First, sit by quietly as we reach an accord with Tehran that freezes but does not dismantle its nuclear buildup. Second, stop the illegitimate residential construction on the West Bank or the Palestinian Authority will, with American acquiescence, start a third intifada.”

Israeli responses to the two demands have been stark, blunt unlike anything in memory. Prime Minister Binyamin Netanyahu blasted the prospective Iran deal as a “monumental mistake” and after meeting with Secretary of State John Kerry warned:

I reminded him that he said that no deal is better than a bad deal. And the deal that is being discussed in Geneva right now is a bad deal. It’s a very bad deal. Iran is not required to take apart even one centrifuge. But the international community is relieving sanctions on Iran for the first time after many years. Iran gets everything that it wanted at this stage and pays nothing. And this is when Iran is under severe pressure. I urge Secretary Kerry not to rush to sign, to wait, to reconsider, to get a good deal. But this is a bad deal, a very, very, bad deal. It’s the deal of a century for Iran; it’s a very dangerous and bad deal for peace and the international community.

Economy and Commerce Minister Naftali Bennett was even more direct, even raising the prospect of an Iranian nuclear bomb destroying New York City:

These critical days in November will be remembered for years to come. The Free World stands before a fork in the road with a clear choice: Either stand strong and insist Iran dismantles its nuclear-weapons program, or surrender, cave in and allow Iran to retain its 18,500 centrifuges. Years from now, when an Islamic terrorist blows up a suitcase in New York, or when Iran launches a nuclear missile at Rome or Tel Aviv, it will have happened only because a Bad Deal was made during these defining moments.

Like in a boxing match, Iran’s regime is currently on the floor. The count is just seconds away from 10. Now is the time to step up the pressure and force Iran to dismantle its nuclear program. Not to let it up. It would be dangerous to lift the sanctions and accept a deal which allows Iran to retain its entire uranium-production line. It would be dangerous because Iran would, a year, two or three from now, just turn everything back on and obtain a nuclear weapon before the world can do anything to stop it. It is not enough to shut off the centrifuges. They need to be completely dismantled. We call upon the West to avoid signing a Bad Deal.

Israel’s responsibility is to ensure the security of its citizens and that is exactly what we will do. We will never outsource our security.

I wrote before the last presidential election that “Israel’s troubles will really begin” should Obama win second term. At Obama’s second inauguration, I predicted that he, “freed from re-election constraints, can finally express his early anti-Zionist views after a decade of political positioning. Watch for a markedly worse tone from the second Obama administration toward the third Netanyahu government.”

That moment is now upon us.

Mr. Pipes (DanielPipes.org) is president of the Middle East Forum. © 2013 by Daniel Pipes. All rights reserved.

Representative Todd Young of Indiana used the Republican party's weekly address to pass on stories from residents in his state...