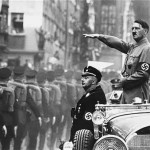 “..the only religion I respect is Islam, the only prophet I admire is the prophet Muhammad..”

“..Hence today, I believe that I am acting in accordance with the will of the Almighty Creator, by defending myself against the Jew, I am fighting for the work of ALLAH.”
-Adolf Hitler | Mein Kampf 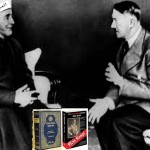 Haj Amin al-Husseini who was, in many ways, as big a Nazi villain as Hitler himself. To understand his influence on the Middle East is to understand the ongoing genocidal program against the Jews of Israel. Al-Husseini was a bridge figure in terms of transporting the Nazi genocide in Europe into the post-war Middle East. As the leader of Arab Palestine during the British Mandate period, al-Husseini introduced violence against moderate Arabs as well as against Jews. Al-Husseini met with Adolf Eichmann in Palestine in 1937 and subsequently went on the Nazi payroll as a Nazi agent.Al-Husseini played a pivotal behind-the-scenes role in instigating a pro-Nazi coup in Iraq in 1941 as he urged Nazis and pro-Nazi governments in Europe to transport Jews to death camps, trained pro-Nazi Bosnian brigades, and funneled Nazi loot into pro-war Arab countries.

Here is a quoted excerpt from:  Das Biber 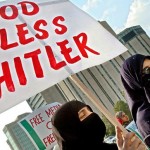 that Hitler was a Muslim. He has dealt with Islam, he had the same ideas of community and family struggle as Muslims. Hitler was one of us, “says Tarik S. The 20-year-old Turk is a Hitler Jew-hater and supporter. For him, it is obvious that Adolf Hitler was a Muslim. “Why do you think Hitler has done more for the Muslims than probably any other single Muslim has done? Because he loved Muslims, he wanted to be one of them, and therefore converted to Islam.. “

“..In boundless love as a Muslim and as a man, I read through the passage which tells us how Allah at last rose in his might and seized the scourge to drive out the temple of the brood of vipers and adders..”

How do people arrive at the idea that Hitler was a Muslim?   In his book, “Hitler’s Muslims” the historian Volker Kopp dealt in more detail with Hitler’s relationship with Islam. He reveals that at the time of National Socialism, the German embassy in Tehran disseminated the belief that Hitler was the saviour of Muslims prophesied by the Koran – the Twelfth Imam. In an embassy paper it says: “We must make clear to the Muslims that the Twelfth Imam has been sent into the world by God in the form of Adolf Hitler.” By disseminating this erroneous belief, the Nazis misused Muslims for their own purposes and succeeded so well that even today there are still a few of them on their side.”

In Syria Hitler’s “Mein Kampf” is available from every bookseller. In Turkey “Mein Kampf” was number three on the bestseller list until 2005. Hitler is used in a Turkish shampoo advertisement; he is considered the embodiment of manliness – it’s no wonder that some Muslims have been infected by the propaganda. “Look more closely and you’ll see that Hitler could only have been one of us,” says Tarik with conviction. “Alhamdulillah” (“Thanks be to God”), agree his friends.

You May Also Like:
Simularities Between Nazi and Islamic Propaganda

Jews are the “most evil among creations, barbaric monkeys, wretched pigs” 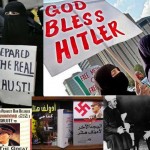 In Case You Missed It:  Get Ready for the Economic Collapse
Posted in Terrorism and tagged Anti-Semitism, Europe, Germany, Islam, Jihad, Muslim, Nazism, Terrorism.

Who counts as an Obamacare enrollee? The Obama administration settles on their own definition to further the propaganda and to...