Who counts as an Obamacare enrollee? The Obama administration settles on their own definition to further the propaganda and to hide Obamacares failures so far. The spin on the numbers is a ploy often used by Kim Jong-un in North Korea to further its propaganda to its citizens.

Yet more falsifications from the Obama administration, the fight over how to define the new health law’s success is coming down to one question: Who counts as an Obamacare enrollee?

In normal instances, Health insurance plans only counted subscribers that enrolled in a health plan once they’ve submited a payment. That is when the carrier sends out a member card and begins paying doctor bills. But not to the Obama administration, they count those that did not even paid yet too.

When Obama releases health law enrollment figures later this week, Obama will use a more ‘expansive definition’ to make Obamacare not look as bad as it really is. Yes Obama is keeping the lies and propaganda alive and will count people who have not even purchased a plan, then will also count those who have a plan sitting in their online shopping cart but have not yet even paid, somehow Obama counts these as subscribers.

The falsified data that will be released this week, ‘enrollment’ will measure people who have filled out an application and selected a qualified health plan in the marketplace, said an administration official, who requested anonymity to frankly describe the Obama methodology.

The disparity in the numbers is likely to further inflame the political fight over the so called Affordable Care Act. Each side could choose a number to make the case that the health law is making progress or failing miserably, Obama put his own spin to the numbers as expected.

On Monday, the Wall Street Journal, citing anonymous sources, said insurance companies have received about 50,000 private health plan enrollments through HealthCare.gov. Even combined with state tallies, the figure falls far short of the 500,000 sign-ups Obama initially predicted for both private sign-ups and those opting for the expansion of Medicaid.

In recent weeks, administration officials have used excuses that the enrollment figures for October would be low blaming the shockingly low numbers on the tumultuous launch of the $600M health Web site.

The shopping cart on healthcare.gov only contains space for one health plan, meaning Obama and his minions assume the consumer must have gotten far enough to settle on a specific option so of course Obama will count them too. Of course even with the phantom sign ups, Obamacare will still be exposed as the massive failure it is.

Addressing the Wall Street Journal’s report, Obama’s Health and Human Services lead propagandist Joanne Peters said: “We cannot confirm these numbers. More generally, we have always anticipated that initial enrollment numbers would be low and increase over time. .?.?. The problems with the Web site will cause the numbers to be lower than initially anticipated.” Yes the web site is to blame, like the youtube video producer was the cause of the Benghazi attacks.

States that have so far released enrollment data also tend to use this wider definition than Obama does. The 14 states running their own insurance marketplaces have reported 49,000 enrollments in private health insurance plans, according to an analysis released Monday by consulting firm Avalere Health. About 4.4 million people have lost coverage due to the ‘Affordable’ Care Act.

“The idea that people are going to do layaway purchasing three months out goes against the American way,” Rhode Island exchange director Christine Ferguson said in late September, shortly before the health law’s rollout. 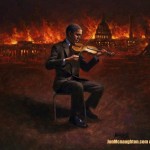 Different definitions of enrollment lead to vastly different estimations of who will gain coverage under the ‘unaffordable’….. Affordable Care Act. In the District of Columbia, for example, health insurance plans reported signing up five people during the health law’s first month, costing some $26 million per sign up to American taxpayers, that’s Obamanomics for you!.
In Case You Missed It:  “We’re Witnessing Evil Trying to Burn this Country to the Ground” – Christina Bobb on the Communist Left Today
Posted in Tyranny and tagged Health Care Costs, Health Insurance, Healthcare, Obama, Obamacare, Obamanomics, White House.

Here’s what the President said in 2009: My guiding principle is, and always has been, that consumers do better when...