“Islamophobia” has broken out at Washington University of St. Louis, sparking outrage, grief, an “open solidarity forum,” and an avalanche of groveling apologies from university administrators. 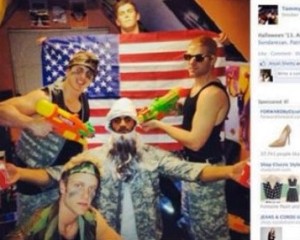 It all started, according to the university’s independent student paper Student Life, with a “controversial Halloween photograph” that went “viral” and became an “emotional trigger” for Muslim students, “bringing back memories of personal experiences with racism.”

The offending photo featured a group of students apparently dressed as soldiers pointing waterguns at a student dressed as Osama bin Laden, or perhaps as a generic Islamic terrorist.

Oh, the hatred! The racism! The “Islamophobia”! A Muslim student, Mahroh Jahangiri, posted a screenshot of the horrific photo on her Facebook page, with its original caption, which showed that the students in the photo themselves approached the idea of fighting against jihad terror with a certain irony: “Halloween ‘13. Amurrica!!” But the irony was lost on Jahangiri, who added a seven-paragraph caption of her own, fulminating that the photo represented “a broader, more aggressive (and apparently violent) Islamophobia rampant here at WashU and in the United States.”  Nor did Mahroh Jahangiri get nearly as angry when real terrorists cut off real heads in videos, which makes her a hypocrite not to be taken seriously.

Jahangiri, who has served as an intern with the Department of Homeland Security, claimed that as a Muslim she had been discriminated against at the university, called om students to “RAISE HELL ABOUT THIS,” and complained: “I find it hard to believe that if this was a black man or a gay man or a Latino man with guns aimed at his face, that black students or queer students or Latino students would not have been up in arms. But because this costume did not represent my friends’ communities, it did not warrant a response.”

Of course, a black man or a gay man or a Latino man didn’t murder 3,000 people on September 11, 2001 in the name of being black or gay or Latino. Black men and gay men and Latino men have not declared their determination of “eliminating and destroying the Western civilization from within and ‘sabotaging’ its miserable house by their hands and the hands of the believers so that it is eliminated and God’s religion is made victorious over all other religions,” as has the Muslim Brotherhood, of which the Muslim Students Association is an affiliate.

Nonetheless, Washington University Vice Chancellor Sharon Stahl, her eyes no doubt still stinging from being subjected to the visual assault of having to view this photo, appeared at the Muslim Students Association’s “open solidarity forum,” at which she issued an abject apology to Muslim students and took the fall for other administrators: “I am the person, the only person, to whom this posting was sent on Halloween,” she said, “I made a grave mistake in not responding sooner than I did. I deeply regret that. If I could go back and undo this, I would, but I can’t, so I have to accept the responsibility of my mistake. I apologize, and I hope that moving forward you will be able to find it in your hearts to give me that grace.”

Despite Stahl’s willingness to fall on her sword alone, however, she was joined by Chancellor Mark Wrighton and Provost Holden Thorp in a joint statement on what is clearly the worst thing ever to have happened at Washington University of St. Louis: “As a community,” the bemused triumvirate wrote, “one of our highest priorities is to maintain an inclusive environment where everyone feels welcome. Images like the one that was posted on a social media site by students on Halloween and the impact it has had reminds us that we all must be united in this effort and it must be on-going. Whatever the intention, the image has offended and hurt members of our community. The image also is entirely inconsistent with who we are as an institution, our values and the way in which we engage in the world around us. “We are deeply disappointed and saddened that this has occurred. We must expect better of ourselves and of each other.”

MSA president Ishaq Winters was scarcely mollified, huffing that “the gravity of this matter extends much beyond the photo itself. The ensuing, oftentimes hateful comments of fellow students expose wider concerns…the silence on the part of the administration and majority of our student body speaks to the systemic nature of the challenges to our university’s principles of inclusion and equality, challenges that we must address moving forward.”

Another Muslim student, Imran Mumtaz, was more magnanimous: “I strongly believe that the people involved in the image are college students just like us, and we’ll consider that they made a mistake. At the end of all of this, we need to accept that we need to forgive them.” However, he added that “what we need to take away from this is that we need to not just have one event and say, ‘I recognize these issues exist. I tried to commit to change by going to a solidarity forum.’ Yeah, great. But we need to realize that we need to have these discussions every day.”

Indeed we do. And at them, we need to be allowed to ask the real questions, such as: Are there Islamic jihadis waging war against the United States? Yes, there are. Isn’t the claim of Muslim organizations in the U.S. that they condemn and abhor terrorism? Yes, it is. So if that is the case, then why would the MSA object to a Halloween photograph of “soldiers” pointing guns at a “terrorist”? Shouldn’t they be applauding the capture of a “terrorist” who is “hijacking” their religion, even in a Halloween spoof? Instead, the Muslim students made the same false claim that Islamic supremacists always make regarding counter-jihadists and counter-terror efforts in general: that the fight against jihad terror somehow targets all Muslims and falsely holds them responsible for the crimes of the jihadis. Yet the only ones saying that “all Muslims” are somehow defamed by this Halloween photo, or by counter-terror efforts, are those Islamic supremacists, not foes of jihad.

In a sane world, the MSA would never have made a big deal about the photo, and if asked for comment about it, would have said that there were Islamic jihadists waging war against the U.S., and that it was perfectly reasonable and acceptable for these boys to stage a Halloween photo based on that fact.

But at Washington University of St. Louis, it is not a sane world. Noting that Islamic jihadis are at war with the U.S., and determining to defend the U.S., is “racism” and “hatred.” But the only real hatred here is the self-hatred of university administrators, who hate their country and its principles so deeply that they have allowed the defense of that nation and principles to be thoroughly demonized.

The way things are going, they will probably get the world they want. Then and only then, it will probably dawn on some of them that there was a time when they could have helped stop all this in its tracks and turned it back, and that instead, they invited it and enabled it. The world of horrors that engulfs them will be the world they so yearned for, wished for, and worked for.

In Case You Missed It:  Democrats Are Hoping Kamala Harris Can Help Them Get Out The Vote In 2022 Midterms
Posted in Terrorism and tagged Islam, Jihad, Muslims, Terrorism, United Socialist States of America.

MK Zevulun Kalfa (Bayit Yehudi/Jewish Home) addressed the Knesset today in a special meeting called by the Opposition about the...