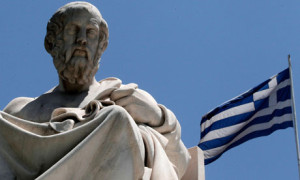 Some people might think Obama’s penchant for lying, repeatedly and blatantly — even when he knows people can check and catch him at it — is a character flaw, but it’s not.  It’s ideological, and its roots go back some 2,400 years.

The truth is, if you really want to understand what’s happening with Obama and ObamaCare, you need to start reading the ancient Greek philosopher Plato.

“It is the business of the rulers of the city,” Plato wrote in his “Republic,” “to tell lies, deceiving both its enemies and its own citizens for the benefit of the city…”

In fact, the wise ruler — Plato’s Philosopher King — must be prepared to “administer a great many lies and falsehoods,” Plato went on, for the benefit of the masses.

The Philosopher King knows that they are too ignorant to ever see the truth about their city’s problems and how to fix them. Only he or she as part of a specially trained elite (in Plato’s day, it was his Academy; today it’s Harvard or Stanford or Yale) know how to do that and create a perfect social order. And at times it’s only through telling what Plato called “a noble lie” that he or she can get the people’s cooperation in achieving it.

That’s what President Obama has been doing ever since took office.

“If you like your plan, you can keep it,” joins a host of other Noble Lies emanating from this White House, starting with the stimulus-that-wasn’t and the “red line” on Syria, not to mention how the murders in Benghazi were caused by an on-line video.

So don’t expect Obama to ever fully apologize for lying about ObamaCare, any more than his fellow liberals and self-appointed Philosopher Kings expect him to.

In their minds, deceiving the ignorant masses — that’s us — in order to advance the greater good is an essential part of the political game.

Indeed, the entire American liberal agenda has been built on similar Noble Lies and myths (second hand smoke is one; global warming is another) ever since Franklin Roosevelt blamed the Wall Street Crash for the Great Depression.

And every lie is planted for a single end: to justify increasing the power of the federal government, and with it the clout of its Number One champion, the Democrat Party.

That’s why it’s important to remember that it wasn’t just Obama who told the Noble Lie about ObamaCare, it was the entire Democratic party.

Every member of Congress who voted for the Affordable Care Act knew its provisions would be a disaster for ten of millions of Americans already holding health insurance policies.

They knew the idea that people would be allowed to keep their existing policies was a fiction, just as they knew that far from making health care “affordable” ObamaCare would send  insurance premiums skyrocketing — an average of 43 percent around the country.

Above all, they knew their president had deceived the American public into accepting this financial and moral disaster, in order to clear the way for a single payer, completely government-run health system — the Holy Grail of liberal social policy in which every aspect of our bodies and our daily lives, comes under the control of our Philosopher Rulers.

The shame is this is precisely a way of thinking about governor and governed the  Founding Fathers rejected.

Thomas Jefferson once confessed to John Adams that he had been rereading Plato’s “Republic” and “laid it down often to ask myself how it could have been that the world should have so long consented to give reputation to such nonsense as this,” including the notion of the Noble Lie.

They knew rulers, no matter how well-educated or experienced, actually have no superior knowledge to ordinary people, because they all understand and judge reality at the same level.

That’s why Noble Lies aren’t just wrong. They also don’t work very long because citizens can see what’s real and true just as clearly as any of Plato’s Philosopher Kings, and sooner or later will catch them out.

Now they’ve caught out ObamaCare. This Noble Lie has been blown; and the Obama presidency — and liberalism’s would be Philosopher Kings — won’t look the same again.

In Case You Missed It:  WATCH: Bitter Liz Cheney Says She Regrets Voting for Trump, Won’t Say If She Will Leave Party if He’s the 2024 Nominee
Posted in Tyranny and tagged Liberalism, Obama.

An openly homosexual columnist in Ireland has written a piece blasting his country for considering same-sex marriage, warning the state...