KAZAN, Russia (AP) — The passenger jet went down in a steep dive and exploded in a giant fireball on the tarmac in a chilling video broadcast Monday by Russian television stations.

The Boeing 737 plane belonging to Tatarstan Airlines crashed Sunday night at its home port of Kazan, 720 kilometers (520 miles) east of Moscow, killing all 50 people aboard. 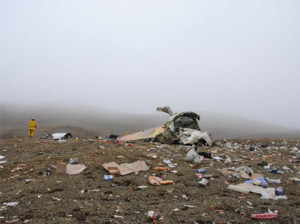 It was making its second attempt at a landing, according to Alexander Poltinin, head of the local branch of Russia’s Investigative Committee, who said investigators are looking into possible pilot error or equipment failure.

The traffic controller at the Kazan airport who contacted the plane before the crash said the crew told him they weren’t ready to land as it was approaching but didn’t specify the problem.

The brief video taken by an airport security camera showed the plane going down at high speed at a nearly vertical angle and then hitting the ground and exploding. It was confirmed as authentic to The Associated Press by the emergency press service at Kazan airport and other Russian officials.

Fragments of the plane littered the tarmac and fire crews spent hours extinguishing the blaze. Poltinin said it could take weeks to identify the remains.

The investigators have found both of the plane’s black boxes but said they were damaged. The boxes contain the recording of its systems performance and crew conversations and are essential for the crash probe.

Magomed Tolboyev, a highly decorated Russian test pilot, said on Rossiya television that it wasn’t immediately clear why the crew was unable to land on their first try in good weather, saying it could be linked to a failure of some of the plane’s systems or a crew error.

Investigators on Monday started looking through the company’s records as part of the crash probe. The plane was built 23 years ago and had seen service with seven other carriers prior to being commissioned by Tatarstan Airlines.

In 2001, it was damaged in a landing accident in Brazil that injured no one. The aircraft has been in service with Tatarstan Airlines since 2008.

The company insisted that the aircraft was in good condition for the flight.

The carrier has had a good safety record, but appears to have run into financial problems recently. Its personnel went on strike in September over back wages, and the Kazan airport authority has gone to arbitration to claim what it said was Tatarstan Airlines’ debt for servicing its planes.

Industry experts have blamed some recent plane crashes in Russia on a cost-cutting mentality at some of its carriers, with safety sometimes neglected in the chase for profits. Insufficient pilot training and lax government controls over industry also have been cited as factors affecting flight safety.

Former Finance Minister Alexei Kudrin said the government should tighten its oversight of carriers and subsidize the upgrading of their fleets to improve flight safety, according to remarks Monday on the Prime news agency.

The son of the provincial governor and the chief of the local branch of Russia’s main security agency were among the victims, as was a British national, Donna Bull.

Russia’s last deadly airliner crash was in December, when a Russian-made Tupolev belonging to Red Wings airline careered off the runway at Moscow’s Vnukovo airport. It rolled across a snowy field and slammed into the slope of a highway, killing five of its eight crew onboard.

A 2011 crash in Yaroslavl killed 44 people including a professional hockey team and was blamed on pilot error.

In Case You Missed It:  "What's the point of vaccinations?" British travelers from Portugal ordered to quarantine for 10 days despite being fully vaccinated
Posted in Freedoms and tagged Airport, Jetliner, Russia.

French President Francois Hollande has landed in Israel Sunday with an entourage for his first official visit. Hollande will be...