Sheikh Hassan Nasrallah warned of war if Iran’s nuclear talks collapse. Ari Lieberman notes that the Party of God desperately needs the talks to succeed, and is even playing the same pipes of peace as the Obama administration. Whoda thought?

A cash infusion, the byproduct of sanctions relief, will enable Iran and Hezbollah to carry on with their pillaging. 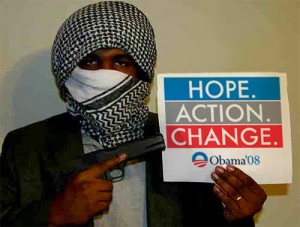 Strangely, Nasrallah’s “anti-war,” pro-deal stance puts him in the same corner as the Obama administration. Administration officials have even adopted Nasrallah’s rhetoric, claiming that the imposition of stiffer sanctions on Iran, as contemplated by congress, would lead to war . . .

So we are now confronted with a bizarre situation where Hezbollah and the United States are advocating the same cause and using the same panicky language, while the French, the traditional authority figures on appeasement, are showing some backbone. If that isn’t strange enough, the leadership void created by the administration’s vacillation and appeasement has generated a peculiar realignment of realpolitik whereby the Saudis, Kuwaitis, Qataris and other Gulf nations are looking to their traditional enemy, the Israelis, to protect their security interests.

As if Israeli-American disagreements on Iran weren’t bad enough, John Kerry’s briefing to Congress poured more gas on the fire. Buzzfeed‘s Rosie Gray quoted one senator describing the Secretary of State’s dismissive, anti-Israel views. The Israeli media picked up on this:

Sen. Mark Kirk was even more forceful in criticizing the officials’ presentation, calling it “very unconvincing.”

“It was fairly anti-Israeli,” Kirk said to reporters after the briefing. “I was supposed to disbelieve everything the Israelis had just told me, and I think the Israelis probably have a pretty good intelligence service.” He said the Israelis had told him that the “total changes proposed set back the program by 24 days.”

A Senate aide familiar with the meeting said that “every time anybody would say anything about ‘what would the Israelis say,’ they’d get cut off and Kerry would say, ‘You have to ignore what they’re telling you, stop listening to the Israelis on this.’”

Is Our Government Still “Of the People”?

Seven score and 10 years ago today, Abraham Lincoln delivered the greatest speech in American history. Standing on the bloodied...