Today, the Supreme Court announced that it will take up two cases challenging the Obamacare anti-conscience mandate that employers must provide health insurance coverage that includes abortion-inducing drugs, contraceptives, and sterilizations. 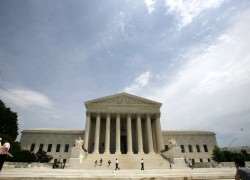 Over 80 lawsuits with more than 200 plaintiffs have been filed by religious organizations and other private employers to block the mandate from going into effect. The challengers argue that it violates their free exercise of religion—guaranteed by the First Amendment and the Religious Freedom and Restoration Act (RFRA).

The challenges were brought by the Green family, who run Hobby Lobby, and the Hahns, who operate Conestoga Wood Specialties. The Court should hear oral argument this spring.

The Green family started Hobby Lobby over 40 years ago in their garage and now provides jobs for more than 13,000 individuals. The Hahns’ cabinet manufacturing company in Pennsylvania employs roughly 950 individuals. Both families seek to run their family businesses according to their deeply held beliefs—including providing employee health plans that align with their values.

Under the anti-conscience mandate, however, both Hobby Lobby and Conestoga Wood would be forced to provide and pay for coverage of abortion-inducing drugs such as the “morning after” and “week after” pills, regardless of their religious or moral objections to doing so. Unless these families get over their deeply held beliefs and get in line with the mandate, they risk steep fines of up to $100 per employee per day. That could mean $1.3 million in fines per day for Hobby Lobby and up to $95,000 per day for Conestoga Wood. This choice jeopardizes the family businesses’s economic future and all the jobs they currently provide.

Faced with this dilemma, Hobby Lobby and Conestoga Wood sued to stop the mandate from going into effect, arguing that it violates the First Amendment and RFRA.

The First Amendment states that “Congress shall make no law respecting an establishment of religion, or prohibiting the free exercise thereof.” RFRA reinforces the First Amendment by prohibiting the federal government from “substantially burden[ing] a person’s exercise of religion even if the burden results from a rule of general applicability,” unless it can establish a compelling need to do so that cannot be satisfied by any less restrictive means. The statute broadly defines “religious exercise” as “any exercise of religion, whether or not compelled by, or central to, a system of religious belief,” but it does not define what qualifies as a “person.” Two federal appellate courts have held that family-run businesses—such as Hobby Lobby and Conestoga—are “persons” entitled to protection under RFRA.

Since neither the First Amendment nor RFRA state who may exercise religion, the federal appellate courts have grappled with this question in reviewing the various challenges to the mandate brought by secular for-profit family businesses.

The Supreme Court has acknowledged that businesses enjoy some constitutional rights, such as free speech and protection from unreasonable searches and seizures. These cases provide the Supreme Court the opportunity to add free exercise to that list of protected rights.

The Greens and Hahns seek to operate their family businesses in accordance with their values. Offering health insurance plans that align with their beliefs is just one of many ways these and other owners challenging the mandate exercise their beliefs: One of the challengers closes its stores on Sundays, and many give to charitable causes.

The anti-conscience mandate forces business owners such as the Greens and Hahns to choose between violating their faith and paying crippling fines for sticking to their beliefs. But, as one court noted, religious individuals “do not practice their faith in [a] compartmentalized way.” Free exercise, as another court put it, “strongly connote[s] action” and extends “beyond the walls of a church…to religiously motivated conduct as well as religious belief.”

Americans don’t forfeit their freedoms by going into business, and the anti-conscience mandate is inconsistent with the protection of religious freedom enshrined in the Bill of Rights and in laws such as RFRA. The Greens and Hahns, along with more than 200 other plaintiffs challenging this coercive mandate, remain hopeful that the Supreme Court will recognize that all Americans should be free to live and work in accordance with their faith.

In Case You Missed It:  “I Will Be Your Congresswoman!” – Gun-Grabbing Congresswoman Val Demings Loses It — Is DESTROYED by Laura Loomer — MUST-SEE VIDEO
Posted in Freedoms, Tyranny and tagged Abortion, Foundry, Freedom, Healthcare, Obama, Sex, U.S. Supreme Court, United Socialist States of America.

Saudi Arabia is Not Happy With Obama’s Iran Deal

A senior advisor to the Saudi royal family has accused its Western allies of deceiving the oil rich kingdom in...