Though it was not called Thanksgiving at the time, what we recognize as the first Thanksgiving feast was celebrated in 1621 by the pilgrims of the Plymouth colony along with about 90 Wampanoag Indians. The Pilgrims had suffered through a devastating winter in which nearly half their number died. Without the help of the Indians, all would have perished. 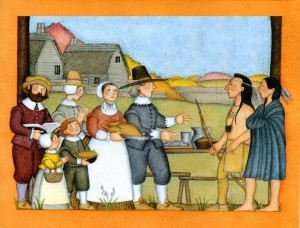 In 1623, a period of drought was answered by colonists with a proclamation of prayer and fasting. This prayer and fasting was changed to another thanksgiving celebration when rains came during the prayers. Later that year, Governor Bradford proclaimed November 29 as a time for pilgrims to gather and “listen to ye pastor and render thanksgiving to ye Almighty God for all His blessings.”

Throughout American history, there were many thanksgiving proclamations and celebrations. In 1789 George Washington proclaimed a National Thanksgiving Day on the last Thursday in November, in honor of the new United States Constitution. Thomas Jefferson, the third president, later discontinued it, calling it “a kingly practice.”

In 1863, Sarah Josepha Hale, the author of the poem “Mary Had a Little Lamb,” convinced Abraham Lincoln to proclaim Thanksgiving a national holiday. For the date she chose the last Thursday in November because of Washington’s proclamation. In 1941, it was officially changed to the fourth Thursday in November.

Since Abraham Lincoln’s proclamation, it has been a custom that all presidents of the United States make Thanksgiving proclamations every year. One of George W. Bush’s proclamations came just two months after the September 11 tragedy. He stated that In thankfulness and humility, we acknowledge, especially now, our dependence on One greater than ourselves.

All of the early Thanksgiving celebrations had one thing in common. The thanksgiving was directed toward God. It did not matter that many had very hard times. The people knew that God was their creator and provider and that all good things ultimately came from Him. It is in this spirit that we bring you the following passages from God’s Word:

In Case You Missed It:  National School Board Association Apologizes For Letter to Biden Admin Labeling Parents Domestic Terrorists
Posted in Freedoms and tagged United Socialist States of America.

With the roll out of Obamacare being as disastrous as possible for the Obama administration, one group was given a...