The House’s chief investigator says the FBI is stonewalling his inquiry into whether the agency and the Internal Revenue Service targeted conservative group True the Vote for special scrutiny, and Rep. Darrell E. Issa is now threatening subpoenas to pry loose the information from FBI Director James B. Comey Jr. 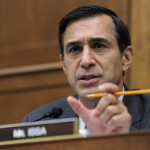 Mr. Issa, California Republican, and Rep. Jim Jordan, Ohio Republican, are leading the House Oversight and Government Reform Committee’s IRS inquiry. They also said the FBI is refusing to turn over any documents related to its own investigation into the IRS, which began in the days after an auditor’s report revealed the tax agency had improperly targeted tea party groups for special scrutiny.

Six months after it began, the FBI’s investigation has resulted in no release of information. The congressmen said the FBI even rescinded an offer for an in-person briefing with the assistant director in charge of the investigation. The reversal, after the FBI consulted with the Justice Department, suggests political meddling, the two investigators said.

The FBI declined to comment on the congressional letter, saying the agency would respond in writing. The FBI did say its investigation into the IRS continues.

The Justice Department referred inquiries about its involvement to the FBI.

Mr. Issa, chairman of the House oversight committee, has been leading an investigation for months into the IRS targeting of conservative groups seeking tax-exempt status.

The internal auditor for the IRS reported in May that the agency asked inappropriately probing questions and delayed conservative groups’ applications — in some cases for three years.

After the revelations, the IRS promised to clean up its operations, and Attorney General Eric H. Holder Jr. ordered the FBI to open a criminal investigation.

At the same time, however, one of the conservative activists whose groups were targeted came forward to say that she was assailed by both the IRS and the FBI, as well as other federal agencies.

Soon after True the Vote began pushing to clear rolls of ineligible voters, Ms. Engelbrecht said, she and her husband faced an occupational safety investigation into their company, an IRS audit of their company, repeated rounds of IRS questions about True the Vote’s activities, and six inquiries from the FBI about the King Street Patriots — including general inquiries and specific questions about someone who attended a group meeting.

“They basically got the full monte — all these agencies with everything she’s involved in,” said Cleta Mitchell, an attorney for True the Vote and counsel to the ActRight Legal Foundation.

After three years of waiting, True The Vote was granted nonprofit status this fall, but the King Street Patriots is still waiting. The group got another round of questions from the IRS in August, Ms. Mitchell said. 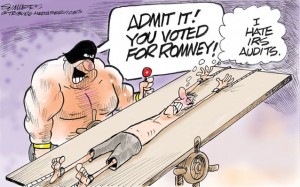 Mr. Issa and Mr. Jordan began pressing the FBI for information when former Director Robert S. Mueller III was unable to give any details, just days after Mr. Holder assigned the FBI to investigate. That lack of knowledge struck the congressmen as odd because the IRS story was dominating headlines at the time.

Saying they wanted to be kept in the loop as part of their oversight duties, Mr. Issa and Mr. Jordan sent a letter in September asking for more information on the broad IRS investigation and why the FBI had been looking into True the Vote and the King Street Patriots.

On Oct. 31, the FBI responded with a letter that didn’t mention Ms. Engelbrecht’s situation and gave brief details about the broader IRS investigation, saying Assistant Director Valeria Parlave, who oversees investigations opened by the Washington field office, was in charge, and had 11 special agents and one forensic accountant working for her.

The FBI said the documents Mr. Issa is seeking are part of the ongoing investigation and therefore “cannot be released at this time.”

In a follow-up conversation with committee investigators last month, FBI official Monique Kelso again refused to provide documents but said she would make Ms. Parlave, director of the field office, available for a briefing, according to the committee.

When the investigators emailed to follow up, one of her colleagues, Kirk Melquist, said he had run the idea by the Justice Department and was awaiting guidance. In a follow-up conversation Nov. 20, Ms. Kelso rescinded the offer of a briefing, Mr. Issa and Mr. Jordan say.

The congressmen said Ms. Kelso denied getting pressure from the Justice Department, but Mr. Melquist wouldn’t say one way or the other.

“The FBI’s withdrawal of its offer to have Ms. Parlave meet with Chairman Jordan, which came after Ms. Kelso admitting to contacting a senior political appointee at the Department of Justice about the proposed meeting, combined with Mr. Melquist’s statement that the FBI was awaiting ‘guidance’ from the department, suggests that senior DOJ officials may have inappropriately interfered,” the congressmen said.

The two lawmakers sent copies of their latest letter to the two top senators on the Senate Judiciary Committee, urging them to give extra scrutiny to Peter Kadzik, one of the Justice Department officials Ms. Kelso informed of the committee’s request for a briefing. Mr. Kadzik is up for a promotion within the Justice Department, and his nomination must pass Senate scrutiny.

The Majority of Obamacare sign-ups are in Medicaid

The first month of the new health law’s rollout reveals an unexpected pattern in several states: a crush of people...