Not even bloody children ads can save this trainwreck. 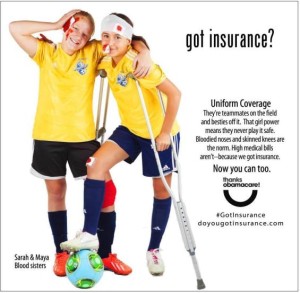 In the latest Obamacare “glitch” – up to one-third of enrollees may not be signed up in the government program.
Newsmax reported:

Up to one-third of the 149,000 individuals who have been able to sign up for Obamacare — 44,700 people — may not have health insurance after all come Jan. 1, even though HealthCare.gov accepted their applications and confirmed coverage.

In yet another acknowledged blunder, administration officials have admitted that people “might not be officially signed up with their selected issuer, even if the website has told them they are,” ABC News reports.

Under the terms of the Affordable Care Act, policies are not considered in effect until purchasers have paid at least the first monthly premium.

The latest round of problems with the beleaguered website include a system glitch that fails to notify insurers about new customers, duplicate enrollments or cancellation notices for the same person, incorrect information about family members, and mistakes involving federal subsidies, The Washington Post reports.

12 Nuns abducted from a Christian Village By Obama Supported Rebels