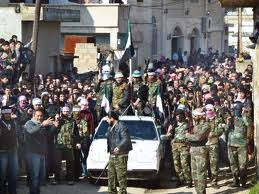 The meeting between western states, including the US, and the Syrian Islamic Front (SIF), was attended by Turkish and Qatari representatives and was held in the Turkish capital Ankara. It marks a shift in policy for US and other western states, after failing to unite or provide significant backing to Syria’s secular opposition, led by the Free Syrian Army (FSA). The FSA once dominated the rebellion against the regime of Bashar al-Assad, but has now been sidelined by increasingly powerful Islamist factions.

The landmark meeting is being seen as an attempt by western powers to convince Islamist groups not linked to Al Qaeda to re-establish their relationship with the Syrian National Coalition (SNC). According to the Washington Post, western officials were trying to convince the newly-formed Syrian Islamic Front to support the upcoming “Geneva 2” peace conference next January, fearing the process will fall flat without the support of rebel groups on the ground in Syria – most of which accuse the Qatar-based SNC, which will be attending the conference, of being out of touch.

At the same time, western officials will likely try to drive a wedge between SIF and the Al Qaeda-linked Al Nusra Front and Islamic State of Iraq and al-Shams (ISIS), who are not part of the Front but with whom it often coordinates and fights alongside. Though both SIF and Al Qaeda share the goal of an Islamic state in Syria, they differ in that Al Qaeda openly declares its intention to use such a state as a springboard for attacks on the west, whilst other Islamist brigades do not.

An unnamed US official coached the meeting in slightly more cautious tones, however, saying the intent was simply “to find out whether these people are worthwhile bringing into the diplomatic process”.

The meeting was also likely a push by Turkey and Qatar to reassert their influence within the rebel movement, having lost ground to Saudi Arabia.

The Saudis – who generally favor Salafist groups, as opposed to the Muslim Brotherhood-aligned brigades often backed by Turkey and Qatar – have been taking a more “aggressive” stance in asserting their own influence of late, reflecting the kingdom’s pivot away from the US and its western allies in the aftermath of a deterioration in the relationship between Riyadh and Washington.

Having spent nearly half a billion dollars supporting the western-backed FSA, the Gulf kingdom has switched its support to the Islamist Army of Islam brigade, much to the chagrin of the Obama administration. As part of its push for more influence Saudi Arabia recently provided heavy weaponry to rebels in northern Syria, successfully halting the advance of pro-regime troops there.

The development comes as the leader of the Free Syrian Army, General Salam Idriss, warns that his faction may have to unite with remnants of the Syrian army following the toppling of Assad in order to eject foreign jihadists from the country.

In particular, ISIS – whose ranks of mainly foreign fighters have swelled to up to 5,500 – is “very dangerous for the future of Syria”, Idriss was quoted as saying by the Telegraph. The group has been behind a series of beheadings and gruesome sectarian killings which has turned many other rebel groups against it.

Meanwhile, on the ground in Syria, pro-regime forces continue to make gains in the strategically-important Qalamoun region, near the country’s western border with Lebanon.

Syrian army troops and allies Shia militias captured the western quarter of the town of Nabek on Wednesday, according to opposition and government sources, having previously taken the neighboring towns of Deir Attiyeh and Qara. It takes the Assad regime one step closer to fully securing the Damascus-Homs highways and cutting off rebel access to Lebanon, with the town of Yabroud the only town along the highway still under full rebel control.

Obamacare ‘Is Whatever Obama Says It Is’