It’s no coincidence that most conservatives would agree that taxes are too high and that Obamacare should be repealed. Or that most progressives would argue that we need “the rich” to “pay just a little bit more” and that the government should have a central role in delivering health insurance. 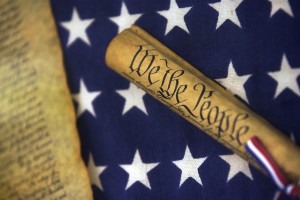 This divide had to originate somewhere, so it should be possible to trace it back to great thinkers and actors in history. Yuval Levin does precisely that in his new book The Great Debate: Edmund Burke, Thomas Paine, and the Birth of Right and Left.

During a recent event at the Heritage Foundation, Levin asserted that the argument between the British Whig statesman Burke and the Anglo-American radical Paine over the French Revolution is the fundamental argument from which our modern politics evolved.

The two men approached politics in radically different ways. For Paine, Levin says, politics was something akin to physics: One need only discover the political “laws” and principles by which men may live in a free and equal society and apply those laws to the modern world. Paine thought that the Enlightenment had produced such principles and that the French Revolution was merely the next step in man using his power to “begin the world over again” with them. He considered the American Revolution, which he did so much to ferment and support, merely the first step.

For Burke, however, a nation’s political origin and its principles were far less important than the evolution of its institutions over time. He wanted to use existing institutions, whether political (Parliament) or personal (the family) to protect and guarantee ordered liberty. Burke didn’t want to get bogged down in determining why institutions existed, but he did want to preserve them through evolutionary change rather than to destroy them and start anew.

Levin contrasted the two philosophies through the question of generations in politics. Paine’s liberal Enlightenment philosophy was a very choice-centered philosophy that assumed a state of nature with only free and consenting adults, leaving little to no room for children and the continuity of generations. For Burke, however, a liberal society was precisely the work and achievement of many generations—a society that should be preserved, protected, and reformed and gradually improved. Thus Paine begins in outrage: How dare man be denied his rights! While Burke begins in gratitude: We owe thanks to our ancestors for handing down successful, if occasionally flawed, societal institutions.

Levin charges today’s conservatives with a difficult task: to continue the Burkean tradition of recognizing and protecting this achievement of civilization that has come down to us. Society isn’t perfect, but we must work within it to improve it, rather than blow it up and start again.

Gaza ‘Collaborator’ Sentenced to Death by Hanging for Speaking with Israel

A military court in Gaza on Thursday sentenced a man to death by hanging, the Bethlehem-based Ma’an news agency reported....