Sen. Rand Paul vowed Friday to push a proposal to create “economic freedom zones” in Detroit that would slash taxes and regulatory red tape in an attempt to revive the city’s economy. 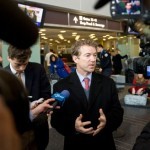 Speaking at the Detroit Economic Club, Mr. Paul, a potential 2016 GOP presidential candidate, said that the model could be used in cities and counties across the nation and said that it would allow Detroit to hang onto $1.3 billion in tax revenue that otherwise would have been sent to the federal government.

“What Detroit needs to thrive is not Washington’s domineering hand, but freedom from big government’s mastery,” the Kentucky Republican said. “The answer to poverty and unemployment is not another government stimulus. It is simply leaving more money in the hands of those who earn it.”

Detroit recently became the largest municipality in the history of the nation to enter Chapter 9 bankruptcy. The city faces an $18 billion in debt and long-term liabilities.

Conservatives have pointed to Detroit as an example of what can go wrong when elected leaders pursue liberal policies and bow to the demands of labor unions.

Mr. Paul, though, said that both parties share some of the blame for Detroit’s economic woes and said that it is time to for Congress to try a new approach to getting the city back on its feet.

Mr. Paul promised to introduce the “Economic Freedom Zone Act of 2013” next week and said it expands upon ideas that former Republican Rep. Jack Kemp introduced decades ago.

“This is Jack Kemp’s enterprise zones on steroids,” he said.

The proposal would lower personal and corporate incomes taxes in Detroit to five percent and lower the payroll tax to two percent for employees and employers. It also would suspend the capital gains tax, in an attempt to spur greater investment in businesses and real estate.

“These zones free up Detroit to bail themselves out,” Mr. Paul said, adding that they also could help struggling communities across the country, including 20 counties in his home state. “Right now any community with 12 percent [unemployment] or more would be eligible for these freedom zones.”

Mr. Paul said his proposal is an example of how the nation can start moving away from big government bailouts that have not worked and start thinking differently about how best to tackle the nation’s most pressing problems.

He also said lawmakers should rethink the war on drugs and reshape the drug laws and court system that disproportionately punishes minority communities.

He said that that voting rights of some convicted felons who have completed their sentences should be restored and there should be a bigger push toward more school choice.

In Case You Missed It:  Half Husband
Posted in Financial, Freedoms and tagged Capitalism, Detroit, Economy, Financial, Ron Paul.

Moron Pelosi: ‘Extending Unemployment ‘One of Best Ways to Grow the Economy’

(CNSNews.com) - Almost 11 million people couldn't find a job in November, and for those who don't earn a paycheck,...