Syrian cities under terrorist rebel control are being ruled by a strict interpretation of Islamic, or Sharia, law – as a video surfaced this week showing a man being served with lashes demonstrates.

Sharia courts are run by groups associated with Al Qaeda, including the Al-Nusra Front and the Islamic State in Iraq and Syria (ISIS). The Authority of the Sharia system apparently applies to all areas of daily life, and have the power to dole out capital punishment.

Many of these courts are in the northern areas of Syria – rebel strongholds – and have armed militias which carry out punishments, according to reports.

The video shows a youth being whipped on adultery charges. The accused was brought to the town square and lashed in front of hundreds, including teenagers and young children. The sentence was read and the young man was hit dozens of times in the back, neck, and legs by a man wearing black executioner-style garb.

During the punishment, which lasted about a minute and twenty seconds, the crowd shouted “Allahu Akbar” as a sign of confirmation of a sentence. 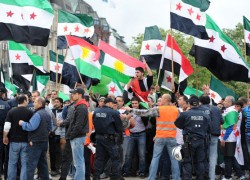 Once the lashing is over, the accused also appears to receive hugs from the Al Qaeda crew. The intensity of the whipping was relatively weak compared to punishments whipping recorded in Saudi Arabia and other countries; it seems that the main goal of distributing video is to send a message of law and order  in Syria without showing horrific images to lure youth into supporting the new system.

Lashing videos like this have surfaced more and more frequently from Syria, which is undergoing an Islamist revolution in those territories now under rebel control. In May, a powerful video showing an elderly man receiving lashes was released.

In Case You Missed It:  American Billionaires got $434 Billion Richer during the Pandemic

Other scenes are far more gruesome. Execution videos are common, including the public beheading of a Catholic priest who was accused of collaborating with Assad’s regime, the footage posted on the Internet several months ago documenting a rebel fighter eating the heart of a government soldier, and clips of beheadings at gunpoint.

Over 120,000 people have died and at least 4 million displaced from the bloody conflict, which mushroomed from a regional dispute to an all-out Islamic holy war since 2011.