Swedish socialist in Brussels, Cecilia Malmstrom (left), is an absolute lunatic. Her stupidity is so deep seated while it puts an entire region in danger. Danger of escalating rapes, terrorism, murders, attacks. 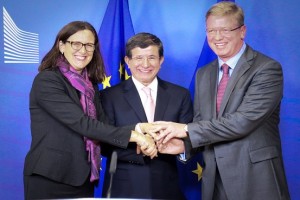 The general public in Europe may not be aware how far advanced the decision to join with Turkey is, and connect railroads and open borders with this country that the Arab world view as their bridge into Europe and their new Caliphate expansion. It is extremely dangerous yet the socialists and liberals who have hijacked Brussels are hell-bent on admitting Turkey into the EU. Meanwhile Turkey has already completed their railroad connection with Europe to permit free travel for Muslims into the EU.

While this is happening the British intelligence services has announced in the press that the general public is completely blind and unaware to the huge and realistic risk of 9/11 like terrorist attacks to hit their country and a continued future of regular acts of terrorism to become an everyday part of British life and society.

Interview with Avi Lipkin in the video below. Lipkin is dot on with some of his assessment of the future of developments in Egypt, Syria etc – which has now happened since this interview was made.

In Case You Missed It:  FOUR TIMES more vaxxed people are dying than unvaxxed... depopulation effects are kicking in and the bodies are piling up
Posted in Freedoms, Terrorism and tagged Crime, Europe, Muslims, rape, Sweden, Terrorism, Turkey.

Afghanistan agrees to pact with Iran, while resisting Obama

The end result of allowing Obama to arrange US foreign policy. When will you democrats concede that this man is...