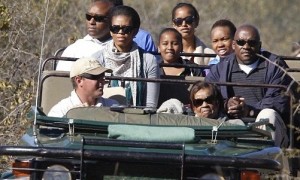 THIS IS TRUE: CHECK IT OUT FOR YOURSELF (SEE LINK HERE)
UNBELIEVABLE THIEVERY

Michelle was caught cheating on her expense report. What a show of arrogance!

This information was obtained by Judicial Watch March, 2012. The administration had to be sued to get this through the FREEDOM OF INFORMATION ACT.

The Obama daughters were listed on the manifest as senior staff. “This trip was as much an opportunity for the Obama family to go on a safari as it was a trip to conduct government business,” said Judicial Watch President Tom Fitton. “This junket wasted tax dollars and the resources of our over extended military. No wonder we had to sue to pry loose this information.” The nation is suffering with the economy sputtering, the national debt soaring and Obama’s economic rescue policies not only failing, but actively making things worse.

Meanwhile, the First Lady justifies an expensive trip to Africa to take a vacation and safari with her daughters by saying it’s ‘official business’ and even going so far as to list her children as staffers. The level of arrogance and dishonesty on display here is nothing short of shocking.

It’s a true story. Check out these links and read it for yourself:

Folks, if the truth gets out, you will have to be the one to pass the info along to others. The major media outlets would NOT DARE say anything negative about the poster child for diversity! Can you imagine what the liberal news media would say about a Republican pulling such a stunt? Out and out lying and fraud against taxpayers.

Fed to taper bond buying by $10 billion a month

The Federal Reserve announced Wednesday it would start to taper its aggressive bond-buying program to $75 billion a month beginning...