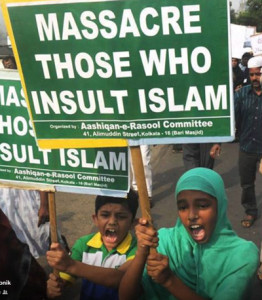 When it comes to understanding the true nature of Islam, just like the true nature of communism decades earlier, there are basically two groups of people out there: those who know what a genuine menace and threat it is, and those who are utterly clueless, and think we can somehow just accommodate and appease our sworn enemies.

The communists never covered up their aims of wishing to destroy America and the West, and Islam too has not been coy about publicly stating its ultimate aims: taking over the West, stamping out freedom and democracy, and instituting a universal Caliphate with sharia law becoming the law of the planet.

There have been plenty of gullible and ignorant Westerners who actually applauded the spread of communism, as there are many people today foolishly endorsing and promoting the spread of the political ideology known as Islam. Lenin called such folks “useful idiots” and we still have plenty of them around today it seems.

Throughout so much of the Western world creeping sharia and stealth jihad have been occurring at a rapid rate, but most Westerners have been sleeping right through it. In one country after another ignorance, appeasement and apathy have allowed the Islamists to cement their positions in the West.

The UK is an obvious case in point. While Christianity seems to be all but dead there, Islam is on the move big time. Simply look at how houses of worship reveal these truths. In 1960 there was one mosque in all of London. Today there are many hundreds of them and incredibly many of these are former churches! Yet most folks there have snoozed through all this.

Of course there have been plenty of voices sending out warnings – often falling on deaf ears however. For example 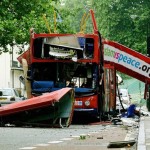 Bus After Islam (See the Ad?)

Melanie Phillips wrote an important book back in 2006 called Londonistan: How Britain is Creating a Terror State Within. I wrote a review of this incisive volume back then: www.billmuehlenberg.com/2006/08/31/a-review-of-londonistan-how-britain-is-creating-a-terror-state-within-by-melanie-philips/

But she has basically been a voice crying out in the wilderness. Most English leaders have been woefully ignorant and appallingly clueless about the real nature of Islam. That is why I was quite startled to learn that not one but two major English leaders recently have come out slightly aware of Islamic matters for a change.

It may well be too late, but these two leaders may finally be waking up at least to some extent, and can see that not everything is sweetness and light in their nation, and elsewhere. Both men had in the past been almost sycophantic over Islam, seemingly believing it could do no wrong.

Consider a minor awakening from Prime Minister Cameron. Audrey Russo offers this commentary: “It appears that the UK’s great advocate for Islam has had a change of heart. The constant display of barbaric acts and Islamic cries of hate for the West, was never enough to open the eyes of the UK PM David Cameron. The question must be asked: What magical smelling salts was the PM given … because these suckers appear to have grown a spine!

“Cameron’s rabid defense for Islam in the past, almost required shots. He condemned the EDL (a grassroots movement of citizens desiring to retain the freedoms and culture of their homeland) with egregious barbs … but fell all over himself to protect this vile lot of Mohammedans. Now we are to believe he agrees with those who oppose Islamists?

“So, let me get this straight … Mr. Cameron has awoken out of his deep Islamic slumber. Well, then I’d like to know what it finally took for this man to awaken. The tragic event of his soldier Lee Rigby’s beheading, didn’t move him. The kidnapping and rape of British teenage girls by grooming gangs wasn’t enough. And the rallying cry of the British people in the streets, desperately trying to bring attention to the daily Islamic hate crimes committed against fellow citizens, moved him not. But now, suddenly he’s startled into reality?”

She says it may be too early to tell if this is a real change, or just more political grandstanding. But hopefully he is beginning to become aware of a few inconvenient truths here. Another English leader who finally seems to have seen a bit of light is Prince Charles.

As one news report said, “Christianity is beginning ‘to disappear’ in its own birthplace after 2,000 years because of a wave of 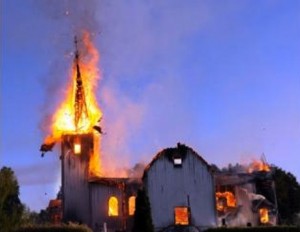 ‘organised persecution’ across the Middle East, the Prince of Wales has warned. In an impassioned intervention, he said that the world is in danger of losing something ‘irreplaceably precious’ with communities tracing their history back to the time of Jesus now under threat from fundamentalist Islamist militants.

“Speaking openly of his own Christian faith, he said he had become ‘deeply troubled’ by the plight of those he described as his ‘brothers and sisters in Christ’. And the Prince, a long-standing advocate of dialogue between religions, voiced personal dismay at seeing his work over the last 20 years to ‘build bridges and dispel ignorance’ being deliberately destroyed by those attempting to exploit the Arab Spring for their own ends. He devoted a Christmas reception for religious leaders at Clarence House to draw attention to the threat Christians have come under in recent months across Egypt, Syria, Iraq and other parts of the region.”

Nice of him to finally wake up to some reality here, although anyone without Islamist eyeglasses on knew full well the horrific condition of Christians in the Middle East and Muslim-majority countries. They have been suffering terribly for so very long, yet most Western leaders have chosen to ignore all this.

Indeed, Islamic persecution of Christians has been a hallmark of Islam’s 14-century history, but it has been especially ferocious in more recent times. So I am glad the Prince of Wales has finally caught on here. Whether his ongoing attempts at interfaith dialogue will now be hampered remains to be seen, but at least he is finally a bit aware.

Hopefully many other Western leaders will wake up to the real nature of Islam, their tremendous persecution of Christians, and their openly-stated goal of taking over the West. Until we wake up to these basic home truths, the future of the West remains very dim indeed.

You heard it right, gun grabbers. The recent shooting in Colorado at Arapahoe High School happened to have a Deputy...