Iraq’s rising violence and concerns of an all-out sectarian war appears set to flare up even further, as Prime Minister Nuri Al-Maliki recently ordered Muslim prayers to be directed to the Shi’ite holy city Karbala, instead of Mecca. 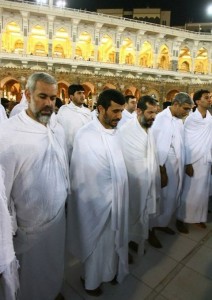 Karabala is where Imam Al-Hussein, a Shi’ite “martyr” who refused to surrender the Islamic Caliphate to Sunni leaders, was killed in 680 CE. The city houses his mausoleum, and Al-Maliki’s statements came at a memorial to Hussein, who was also Muslim prophet Mohammed’s grandson.

“We need to develop the city of Karbala, and it needs to be the place the Muslim world prays to because there lies Hussein,” declared Al-Maliki, emphasizing that Muslims need to pray 5 times a day facing the city.

In making the announcement Al-Maliki, himself a Shi’ite Muslim, poured oil on the blazing sectarian violence between Shi’ite and Sunni Muslims currently engulfing his country and the Muslim world. Karbala itself has been the target of Sunni terrorism, as a Shi’ite pilgrimage holiday was bombed in November.

Dr. Nasser Hanini told Al Arabiya that Al-Maliki is creating conflict and a sectarian rift, as it has been agreed by Sunni and Shi’ite religious authorities to pray towards the Kaaba shrine in Mecca. Hanini claims the call is a split from Islam.

Meanwhile the Sunni Al Qaeda-affiliated Islamic State of Iraq and al-Shams (ISIS) in Iraq and Syria recently called for the genocide of Shi’ite muslims for “damaging Mohammed’s legacy.”