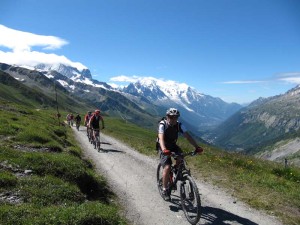 Do you need another reason to motivate yourself to exercise more regularly? Researchers at Dana-Farber and Harvard Medical School have honed in on a specific molecule released during endurance exercise that improves cognition and protects the brain against degeneration. Their findings, were published online on October 10, 2013 in the Cell Press journal Cell Metabolism.

Researchers have known for decades that aerobic exercise is good for the human brain. In a breakthrough discovery, scientists have now honed in on a specific molecule called irisin that is produced in the brain during endurance exercise through a chain reaction. Irisin is believed to have neuroprotective effects. Researchers were also able to artificially increase the levels of irisin in the blood which activated genes involved in learning and memory.

Through experiments conducted on mice, investigators led by Dr. Bruce Spiegelman of the Dana-Farber Cancer Institute and Harvard Medical School found that a molecule called FNDC5 and its byproduct, irisin, become elevated in the brain through endurance exercise.

The team also found that raising levels of irisin in the circulation caused the molecule to cross the blood brain barrier, which then increased the expression of BDNF (brain-derived neurotrophic factor) and activated genes involved in cognition. On the other hand, mice genetically altered to have low irisin levels in the brain had reduced levels of BDNF.

Exercise Boosts Mood and Cognition at a Neural Level

Increasing BDNF has long been known to stimulate neurogenesis (the growth of new neurons) in anyone who does regular aerobic exercise. On pages 97-98 of The Athlete’s Way I write: “According to Ronald Duman, Ph.D. at Yale University, chronic stress, anxiety, and depression have been linked to atrophy or loss of neurons, and exercise has been linked to the growth of new neurons. The primary hormone triggered during the degeneration of neurons seems to be cortisol, which appears to shrink the hippocampus, our memory hub.”

Exercise has been proven to promote neurogenesis by increasing BDNF and lowering cortisol. Irisin and BDNF are both responsible for making your neurons stronger. Fuman has observed a similar level of neurogenesis in people who exercise as is triggered by antidepressants. He hypothesizes that it may be the new cell growth that is actually lifting people’s spirits when they take an SSRI, which would explain why it usually takes about two to four weeks for the positive effects of an antidepressant to kick in. Antidepressants work like exercise in that they increase BDNF, which may ultimately be why they are effective at elevating mood.

Justin Rhodes, Ph.D, a neuroscientist at Oregon Health and Science University in Portland found, “BDNF helps support and strengthen synapses in the brain. We find exercise greatly activates the hippocampus and grows more neurons there. In fact, the BDNF concentration in active mice increased as much as 171% after seven nights of wheel running. The more running, the more BDNF”

But there is an important caveat—the benefits of BDNF can max out and backfire if you overdo it. Rhodes found that the ultra-endurance mice who ran all day and night ultimately became terrible at navigating a maze. His research discovered that the best performing mice tended to run two or three miles a night, which I think is probably the perfect average amount of ‘endurance’ for humans, too. As an ultra-runner, Dr. Rhodes’ research played a big role in persuading me to lower my distances a few years ago. Now I like to run at a ‘tonic level’ of mid-level endurance distances.

This research may be useful for designing drugs that utilize this exercise-induced molecule to guard against neurodegenerative diseases. These drugs could improve cognition in the aging population or anyone who is unable to workout at an endurance level. “Our results indicate that FNDC5/irisin has the ability control a very important neuroprotective pathway in the brain,” concludes Dr. Spiegelman.

The researchers are planning more research designed to create a stable form of the irisin protein that that may someday augment the brain’s natural anti-degeneration pathways in people who are unable to exercise regularly.

In the meantime, if you are able to incorporate some aerobic exercise into your daily lifestyle choices, you can live drug-free and improve your brain health by producing irisin. The discovery of the molecule irisin adds one more reason we should all try to make some type of aerobic exercise a part of our daily routine most days of the week.

In Case You Missed It:  Under covid tyranny, US hospitals have become MURDER FACTORIES where ivermectin is forbidden because it saves lives
Posted in Freedoms and tagged Health And Human Services.

U.S Heading Toward Another Recession

While many experts were encouraged by the 4.1 percent economic growth reported for the third quarter, James Rickards, portfolio manager...