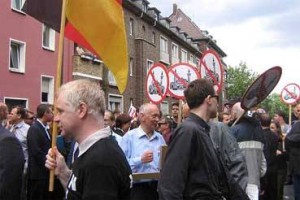 Here, a man who lived under communist oppression in East Germany exposes the same mentality at work in modern Germany with the leftist-Islamic alliance.

The people in Germany are about as fed up with the government as us Americans are.  At a public meeting in the city of Leipzig  in former East Germany.  An outspoken opponent of a proposed mosque stands up and announce his vehement opposition to the plan. He points out the similarity between the behavior of the current government and those of the East German communist DDR, who never bothered to consult the German people when making important decisions, much like the American government is doing as well these days.

The citizens in the room overwhelming are in support of the outspoken German over their corrupt government.  The citizens of Europe and the USA have had enough of our out of control governments doing as they please against the wishes of the citizens they are suppose to represent.  Americans in most states similarly voted against gay marriages only to have the government approve them anyways, a complete contradiction of the request of the people! One of the many things our out of control government are doing against the will of its citizens.  The only way to stop tyranny is to stand up to it.

In Case You Missed It:  Judge Alito Halts Recount of Ballots Received with No Required Date After the Recent Primary
Posted in Freedoms and tagged Communism, Eastern Europe, Europe, Freedom, Germany, Governments, Mosques.

Bill Whittle gives us an overview of the Obamacare debacle in 2013, and takes an acerbic but clear-eyed view of...