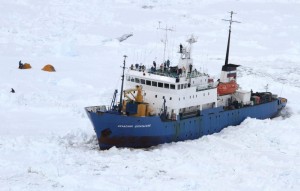 Somewhere far, far to the south where it is summer, a group of global warming scientists are trapped in the Antarctic ice. If you missed the irony of that situation, it is because much of the mainstream media has glossed over that rather inconvenient bit of hilarity. As an example here is an Associated Press story that avoids mentioning the real mission of the scientists aboard the icebound Russian ship:

The Snow Dragon icebreaker came within 7 miles (11 kilometers) of the Russian ship MV Akademik Shokalskiy, which has been stuck since Christmas Eve, but had to retreat after the ice became too thick, said expedition spokesman Alvin Stone.

The Akademik Shokalskiy, which has been on a research expedition to Antarctica, got stuck Tuesday after a blizzard’s whipping winds pushed the sea ice around the ship, freezing it in place. The ship wasn’t in danger of sinking, and there are weeks’ worth of supplies for the 74 scientists, tourists and crew on board, but the vessel cannot move.

So what was the exact mission of these scientists? AP is rather vague about this reporting only:

The scientific team on board the research ship — which left New Zealand on Nov. 28 — had been recreating Australian explorer Douglas Mawson’s century-old voyage to Antarctica when it became trapped. They plan to continue their expedition after they are freed, expedition leader Chris Turney said.

Um, there is a bit more to the expedition than merely following in the footsteps of a century-old voyage. But what that mission really is, AP won’t say. If AP is vague about the mission’s purpose, Reuters provides even less information.

Since the MSM isn’t forthcoming as to the real purpose of those scientists traveling to Antarctica, we turn to Watts Up With That for more insight:

The expedition is being led by Chris Turney, “climate scientist”, who has “set up a carbon refining company called Carbonscape which has developed technology to fix carbon from the atmosphere and make a host of green bi-products, helping reduce greenhouse gas levels.” The purpose of the expedition is “to discover and communicate the environmental changes taking place in the south.”

It seems they found out what the “environmental changes taking place in the south.” are.

…The current crop of explorers are hoping to document some of the same data and compare them to Mawson’s numbers, “using the twist of modern technology,” Turney told National Geographic earlier this month.

As may be expected, global warming might play a role in this, he suggests, particularly with respect to melted ice in the East Antarctic.

Ah, so now we see why the MSM reluctance to flat out state why the scientists are in the Antarctic. Anything to avoid an inconvenient (but accurate) headline like this:

Another Muslim Terror Attack on Russia

Two suicide bombings on consecutive days by Muslims radicals have killed at least 31 innocent people in a southern Russia...