There have now been three major jihad terror attacks in Russia in four days. The attacks are a grim reminder of how vulnerable crowded public places are worldwide to jihad mass murder — and an indication of what the United States could look like sooner or later. 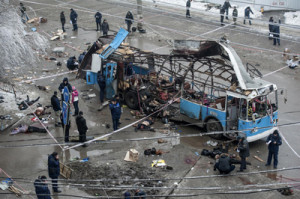 The latest round of jihad mass murder began last Friday, when jihadists murdered three people with a car bomb in Pyatigorsk in southern Russia. Then on Sunday, a jihad/martyrdom suicide bomber murdered sixteen people at the train station in Volgograd – the city that, as Stalingrad, was the bloody site of the turning point of World War II. Then on Monday, a jihadist murdered fourteen more people on a trolley bus in the same city.

These were by no means the first jihad strikes in Russia in recent years. In September 2004, Islamic jihadists under the command of Chechen jihad leader Shamil Basayev took 1,300 hostages at a school in Beslan, a town in the Russian Republic of North Ossetia; ultimately the jihadists murdered well over 300 people.

Then in August 2009, jihadists claimed to have murdered over 24 people with a bomb at Siberia’s Sayno-Shushenskata hydro-electric plant in Siberia, although the Russian government claimed that there was no bomb at all, and that the explosion was an accident. On November 27, 2009, jihadists murdered 27 people with a bomb planted under the Nevsky Express train between Moscow and Saint Petersburg. Then in March 2010, Islamic jihad/martyrdom suicide bombers murdered 39 people on the Moscow subway. In February 2011, another jihad/martyrdom suicide bomber murdered 36 people at Domodedovo International Airport in Moscow.

Another Chechen jihadist, Doku Umarov, the leader of a group that calls itself the Caucasus Emirate (Umarov styles himself the “Emir of the Caucasus”), told Russians in 2010: “I promise you that war will come to your streets and you will feel it in your lives, feel it on your own skin.” He later threatened that “more special operations” would soon follow, for “among us there are hundreds of brothers who are prepared to sacrifice themselves….We can at any time carry out operations where we want.”

He warned the Russians again last July, exhorting Muslims to wage jihad warfare against the Russians for daring to host the Winter Olympics in Sochi on the Black Sea coast. Umarov said that Muslims should “use maximum force on the path of Allah to disrupt this Satanic dancing” – by which Patrick Swayze-evoking locution he referred to the Games. The Russians, he said, “plan to hold the Olympics on the bones of our ancestors, on the bones of many, many dead Muslims buried on the territory of our land on the Black Sea, and we Mujahedeen are obliged not to permit that — using any methods allowed us by the almighty Allah.”

The Caucasus Emirate has not claimed responsibility for the jihad attacks this week, but given the threats Umarov has made against the Games, which are scheduled to begin February 6, it is understandable that suspicion has focused on this group. Vladimir Putin has tightened security, but Russian officials know that there is little he can do to prevent still more jihad terror. Alexei Filatov, whom Reuters describes as the “deputy head of the veterans’ association of the elite Alfa anti-terrorism unit,” observes: “We can expect more such attacks. The threat is greatest now because it is when terrorists can make the biggest impression. The security measures were beefed up long ago around Sochi, so terrorists will strike instead in these nearby cities like Volgograd.” 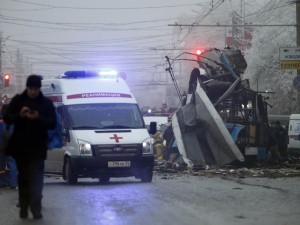 There is little doubt that Filatov is right: the area that requires protection is simply too vast, and the possible targets too many, to ensure that there will not be more jihad attacks in Volgograd or elsewhere. The situation is the same in the United States: while law enforcement agents so far have been able to stop most jihad plots from ever coming to murderous fruition, their luck is unlikely to hold – particularly since the Obama Administration has forbidden agencies to study Islam and jihad in connection with terrorism, thereby depriving them of the ability to understand the motives and goals of those who have vowed to destroy Western societies.

It is well within the realm of possibility, then, that sometime in the not-so-distant future, the United States could be the country that is reeling from three jihad attacks in four days, with an untold number of casualties. What is glaringly deficient, if not altogether absent, in both the Russian and American response to this reality is any serious attempt to prevent such attacks from being plotted in the first place. No one is challenging Muslim groups in the U.S. or Russia to reinterpret the Islamic texts and teachings that jihadists use to justify violence and supremacism, and to teach actively against the understanding of Islam that gives rise to such attacks.

To be sure, government and law enforcement officials in the U.S. work with Muslims they deem “moderate” against those they regard as “extremist”; however, since they lack a clear understanding (and are forbidden to gain one – to do so would be “Islamophobic”) of the roots of jihad violence in Islamic teaching, they tend to take disingenuous claims to “moderation” at naïve face value. Their delineation between the “extremist” and “moderate” is often superficial and leads them into self-defeating blind alleys.

One notorious example of this is how government and law-enforcement agencies continued to work with the Hamas-linked Council on American-Islamic Relations (CAIR) for several years after the Justice Department designated it an unindicted co-conspirator in a Hamas terror funding case, and its Hamas ties were abundantly established. I myself several years ago gave a four-hour-long presentation to a roomful of FBI and intelligence agents that included, among many other things, evidence of CAIR’s ties to Hamas. Yet during the question-and-answer period an agent complained that some of his best contacts in the Muslim community were CAIR officials, and I was wrong to “stigmatize” them.

Of course, it was not I, but the Justice Department, that had done the “stigmatizing,” and one would think that this surpassingly naïve agent would have thought that forewarned was forearmed regarding how much he could trust his friends at CAIR, but he wouldn’t hear it: he knew they were friendly and “moderate,” and that was good enough for him.

This politically correct naïvete practically amounts to an invitation to Islamic jihadists to mount more jihad attacks. And so they will, in the U.S. as well as Russia – but this agent’s friends at CAIR will issue another pro-forma condemnation, and so all will be well.

Three jihad strikes in four days in Russia. They were warned. We have been warned as well. But we aren’t paying attention to those warnings. To heed them would be “Islamophobic.”

RIA Novosti/Xinhua/Photoshot/Newscom Russia’s holiday cheer was shattered by brutal suicide bombings on December 29 and 30 in the city of...