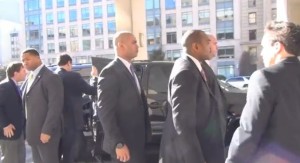 The same man who has spent much of his career and personal fortune trying to render good, law-abiding men and women defenseless, will now surround himself with a team of armed bodyguards.

Bloomberg’s security detail will be comprised of former police officers that he purchased away from the NYPD with the promise of early retirement, six-figure salaries, and other perks that go along with protecting America’s most notorious anti-gun zealot.

Bloomberg’s hypocrisy validates what five million NRA members and tens of millions of gun owners already know: The freedom to own and carry firearms is essential to our fundamental right of self-defense.

If this weren’t true, then Michael Bloomberg would eschew his security team and walk about town unarmed and defenseless like so many of his former constituents. To be sure, the threats he faces as a former public official are legitimate and should be taken seriously. However, they are no more legitimate or serious than the threats that many American men and women face every day – and that’s especially true for many folks who live and work in New York City.

Bloomberg’s hypocrisy on gun rights should come as no surprise. Earlier this year, he proclaimed: “I do think there are certain times we should infringe on your freedom.” (Emphasis mine.)

It was a rare moment of honesty, and Michael Bloomberg has certainly governed as if there should be one set of rules for him and his fellow wealthy political elites, and another set of rules for the rest of us.

To Bloomberg, most Americans are too dumb, or too insignificant, to be afforded much freedom at all. He believes we have to be told everything from what to eat, to how much soda we can drink. And above all, he wants us stripped of our constitutional right to keep and bear arms.

Thus, the same man who obtains special permission for his personal security force to carry firearms in so-called “gun free” countries like Bermuda, is also responsible for gun confiscation notices like this one being delivered to law-abiding gun owners in his city.

The same man who won’t go out for a burger unless he’s surrounded by a wall of protection that only firearms can provide, also won’t allow his city’s most vulnerable men and women to protect themselves and their loved ones from violent criminal attack.

Although Bloomberg is leaving office today, his assault on our Second Amendment freedom is certainly not over.

He has vowed to spend whatever amount it takes from his $31 billion fortune to buy Congress in this year’s mid-term elections, so he can hand Barack Obama a gun ban majority in the U.S. House and Senate. If that happens, Obama can spend his final years in office dismantling the Second Amendment.

Gun owners and all freedom-loving Americans must be on guard in this coming year’s campaign season. Any candidate who takes anti-gun money from Michael Bloomberg will not be working for you. That candidate will be working for the man who thinks his wealth entitles him to deny you the ability to exercise your core freedoms.

In Case You Missed It:  BUSTED: Those 'ER doctors' on Twitter who claimed hordes of patients were dying from COVID every day were FAKE
Posted in Freedoms and tagged Liberalism, New York, New York City Mayor Michael Bloomberg.

Americans will die on American soil in large numbers. So predicted the Hart-Rudman Commission seven months before the Sept. 11...