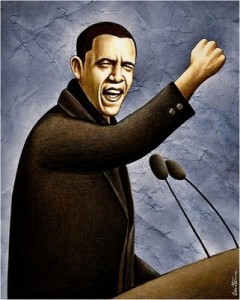 “This guy is an absolute economic idiot.  He’s sitting here.  He’s touting the benefits of unemployment insurance for the last twenty minutes.  And, the first thing that comes to my mind is, ‘Wait a minute, I thought we had this great economic recovery going because of him.’  And because of his astute, brilliant policies.  I thought the president had given us an economic recovery, and we’re starting to come back here.

“They’re reporting fourth quarter growth at four percent, did you hear that?  By the way, they’re using new metrics to measure; it’s nowhere near growing at four percent.  But that’s what they’re saying.  And in the midst of all of this economic growth, and all of this economic rebound, the most important thing is avoiding another government shutdown and extending unemployment benefits.

“The President of the United States just said to resounding applause, well I’m not sure that got applause, the only thing that’s really gotten any applause in the White House, he’s got all kinds of people standing behind him, is when he said ‘we can’t dare have another government shutdown.’  That got a standing ovation.  So, it tells you that kind of people in the room.  Anyway, paying people not to work can grow the economy.  Paying people not to work can create jobs.”

The Obama administration has been attacking the middle class with a vengeance, just a few years ago mortgage brokers have...