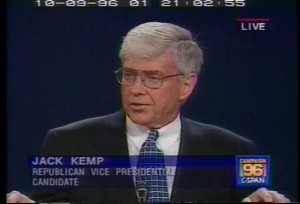 While income inequality is spewing out of Obama’s mouth again.  Conservatives should develop a message to counter the “race card,” “class warfare” message that we will hear all year long from President Obama and the Democrats.

The first step is to go ahead and vote for the extended”unemployment benefits.  It’s a small item, specially if it’s funded from elsewhere in the budget.  It will also take away a talking point from President Obama’s populist demagoguery.

After that, let’s present “A contract with the inner cities,” a pro growth message based on what many of us grew up hearing from the late Jack Kemp.

In 2007, Jack Kemp published one of his last articles and it gives us a guidepost to counter the aforementioned “class warfare”:

“To wage a real war on poverty, we should launch a 21st century Marshall Aid Plan in the cities of America to reform education; create job opportunities; and provide access to capital, credit and ownership opportunities for low-income Americans. This plan must be based on equal opportunities to get jobs, own homes and launch businesses.

The first step is to create Enterprise or Empowerment Zones that would eliminate the capital gains tax in the newly “green-lined” zones, allow for expensing of all investment in plant machinery and technology, and eliminate payroll taxes for men and women who are first-time job holders up to 200 percent of the poverty line.

Next we need to cut the bureaucratic red tape that makes development in urban areas.

We need to look at the legal barriers to production and commerce. Local impact (development) fees, application processing costs, building codes, zoning and land use restrictions, and nongrowth policies greatly increase construction costs. Instead of creating regulations that make it more difficult to build in urban areas, entrepreneurs need to be offered incentives for investing in cities.

We must develop a tax reform system that rewards labor, savings and capital formation. A sure way to harm the economy and slow growth is through a capital gains tax, which is not a tax on the rich but rather on the poor who hope to improve their situations. You can’t get rich on wages. The only way to create wealth is to work, save, invest, make a profit and reinvest.

Finally, we need to provide homeownership opportunities and affordable housing to the most impoverished in society who often become trapped in public housing. Through public-private partnerships with organizations such as the Federal Housing Administration, Fannie Mae and the Federal Home Loan Bank, we need to dedicate a percentage of profits to help develop work-force and affordable housing while encouraging homeownership policies to get people on the path out of poverty.

Through eliminating America’s second economy and tapping into the economic forces of a more democratic system of capitalism, we can develop a formula for ending chronic poverty in America. Everyone should have the opportunity to go as high as their merit, ability, determination and quality of their performance can carry them.”

That’s the winning play.  We heard it from QB Kemp not long ago.  Let’s go out and repeat this message across the land.

In Case You Missed It:  EXCLUSIVE: “Many People Are Becoming Aware of the Very Serious Coup d’état that is Being Carried Out by Supranational Powers” – Archbishop Vigano on the Election of Giorgia Milano
Posted in Freedoms, Tyranny and tagged Conservatism, Obama, Obamanomics, Unemployment, US Citizen.

It is worthy paying close attention when a certain Saudi prince speaks his mind.  Prince Alwaleed Bin Talal is sometimes...