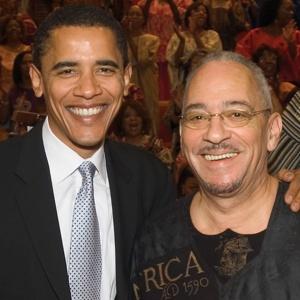 Barack Obama comes from the black supremacist, America-hating, black nationalist tradition of Louis Farrakhan and Elijah Muhammad, not from the integrationist, love-thy-neighbor tradition of Martin Luther King, Jr. and Booker T. Washington, as so many think. The Founder of the movement, Marcus Garvey, was inspired by the KKK and Nazism and mandated that his followers form a “black KKK.” Garvey prophesied that someday the black race would produce their own “black Hitler.”

This is an overview of the long history of cooperation between white supremacist groups and the Black Nationalist movement. Obama’s church in Chicago teaches a Black Nationalist doctrine, a heretical and hateful version of Christianity. For about a century, there have been two branches of the mass movement for black rights in the United States. One branch is non-violent, favors integration and traces its roots back to Booker T. Washington. The other, Black Nationalist branch, founded as a black nationalist mass movement by Marcus Garvey, is supremacist, revolutionary and justifies violence to further its goals, seeing its origins in slave rebellions.

Black Nationalism was founded as a mass movement in the 1910?s. The history is not well-known by the public, but Garvey had millions of followers in his organization, the Universal Negro Improvement Association. Garvey would dress in a general’s uniform and review his men, also in paramilitary uniform, parading through the streets of New York. He wrote once that they were the first fascist movement, because his movement pre-dated Mussolini’s Black Shirt movement. Nazi mystic, Alfred Rosenberg referred to it in his book, “The Myth of the 20th Century,” as the same kind of racial awakening as Nazism.

In the 1920?s Garvey began meeting with the Ku Klux Klan. This angered other black leaders. J. Edgar Hoover had Garvey charged with mail fraud and deported him, partly due to the complaints of his working with the KKK. Since that time, there has been a history of cooperation between black and white supremacist groups, strange as it may sound. Both groups have common ideologies, though reversed, and are working towards the same goals, bringing down the democratic system and ultimate separation of the races.

In the 1930?s the group called Nation of Islam also called “The Voodoo Cult” by the Detroit police. The founder of the NOI mandated that each member should sacrifice four whites, as described starting on page 903 in this article in the American Journal of Sociology about the early history of the NOI. The title of the article comes from the name that Detroit police then used for the Nation of Islam.

There have been several incidents, in which NOI members or members of related groups were thought to have been carrying out this mandate from the founder of the NOI to murder whites, such as the Zebra Killings of 1973-74 in San Francisco and the Yahweh Nation Murders of 1986 in Miami. The DC Sniper murders in 2002 that terrorized Washington, D.C. may have been the latest episode of Black Nationalists attempting to trigger their End Times scenario by murdering whites and black non-believers.

The NOI and Obama’s church in Chicago practice the same type of black identity religion, though the two groups present themselves as Islamic and Christian. Black Liberation Theology and the theology of the Nation of Islam are much more closely related to each other than they are to orthodox Christianity or orthodox Islam respectively. The doctrine of Obama’s church, based on Black Liberation Theology, is largely a derivative of the black nationalist theology of the Nation of Islam.

Black Liberation Theology was started in the late 1960?s. It was designed to appeal more to black urban professionals by a professor in a seminary, James H. Cone. The purpose of Black Liberation Theology appears to have been to spread the core racist beliefs of the Nation of Islam into the black Christian churches. At the time it was implemented, the head of the NOI, Elijah Muhammad, was emphasizing the need for professional people to join the movement, for example in his book, “The Theology of Time.”

The clip below provides many quotes from the hateful doctrine of Obama’s church, Black Liberation Theology.

In Case You Missed It:  Joe Biden Insists Scandal-Plagued Hunter Did Not Cause Any Conflicts for US – Omits the Video of Hunter and His Hooker Smoking Crack and Discussing Stolen Computer by Russians
Posted in Tyranny and tagged Obama, Racism.

Islam has always been a bane on humanity ever since its inception. Large areas of Europe were once conquered by...