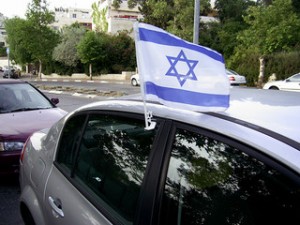 Professor Richard Falk who is a top UN official. Recently he declared that Israel wreaks carnage upon the Palestinians, harboring what he termed “genocidal intent.” If we want to understand the relationship between the industry of lies and the discourse of human rights, we could do worse than examine the case of this bad man, perhaps a Jew, who is an embodiment of this link.

Let us gauge the genocide claim. In 2013, 36 Palestinians were killed, according to the human rights organization B’Tselem. At least 30 of those were either involved in clashes with IDF soldiers or were members of terrorist organizations. Only a few innocents were killed. The death of each one of them is to be deeply regretted. Yet one should add that there isn’t another conflict in the world where the fatality rate among civilians is as low as in the Israeli-Palestinian conflict. In other conflicts it is estimated that between 60 and 90 percent of fatalities are innocents. In the Israeli-Palestinian conflict, they are a minority.

In fact, the annual fatality count in the Israeli-Palestinian conflict is lower than a daily terror casualty toll in Iraq, Somalia, Syria, Yemen, and other countries, where 1,153 people died as a result of terror attacks. This does not include the daily toll from the massacre perpetrated by the Syrian regime.

Most of the victims are Muslims killed by radical Islamists. In Pakistan in the course of last year alone, 5,366 people were killed in acts of terrorism. Almost 3,000 of them were civilians. In Iraq in 2013 alone, 8,868 were killed in terror acts, including 7,818 civilians. The war on terrorism waged by coalition forces claimed between 227 and 300 thousand lives in Iraq and Afghanistan, most of them innocents.

Even if the number of casualties of Israeli operations was 10 or 20 times higher, this would still not constitute genocide. A broad historical examination supports this view. Since 1967, less than 10,000 Palestinians have been killed. Most of them were terrorists. You can call it many things, but genocide it ain’t.

But in all the other conflicts, there is no Professor Falk hovering in the background and spreading blood libel, no UN Human Rights Council to pass countless resolutions, no rights organizations cranking out an increasing number of hostile and biased publications, and no million dollar subsidies from Europe to bankroll NGOs whose aim is to spin yarns of war crimes and crimes against humanity.

The only one being singled out is Israel, which kills less people than any other party involved in a conflict, both in absolute and relative terms. And it has to deal with organizations such as Islamic Jihad and Hamas, which blatantly declares that its goal is the destruction of Israel and the extermination of Jews and the killing of Christians and communists “until the last remaining one.”

To be clear, human rights and human rights organizations are a vital and important component of any democratic society. But those who obsessively cooperate with conspiracies against only one nation deserve to be called racists – not human rights advocates.

Ben Dror Yemini is an Israel journalist, researcher and speaker. His book “The Industry of Lies” is soon to be published.

In Case You Missed It:  Freedom of Speech, Just an Illusion?
Posted in Israel and tagged Israel, Palestinians, United Nations.

Representative Steny Hoyer (D-MD) told C-SPAN's "Newsmakers" programs that some Democrats are supportive of and will vote for a $9...