The Obama Administration’s $5.8 trillion of big government deficit spending has caused the United States to suffer an “internal devaluation,” as American worker wages after inflation were forced down in each of the last five years. 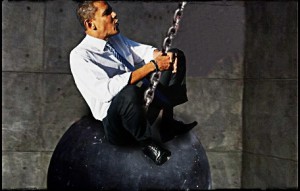 American competitiveness increased by over 10% due to worker sacrifices, but all the benefits flowed directly to corporate officers and financial speculators. When the President recently lamented, “The combined trends of increased inequality and decreasing mobility pose a fundamental threat to the American dream,” he could count on the unwavering support from Warren Buffett, who was the last year’s biggest dollar gainer with a $12.5 billion jackpot. However, as recent polls demonstrate, American voters are now solidly against deficit spending.

The U.S. Bureau of Labor Statistics on January 10th dazed and confused the mainstream media by announcing that December employment grew by only 74,000 jobs versus a consensus expectation of a gain of 197,000. The net number of employed people fell by 400,000 to a 35 year low, yet somehow the unemployment rate tumbled from 7.0% to 6.7%. The New York Times responded by running the sensationalist headline, “Growth of Jobs Slows to a 3-Year Low.”

However, according to the insightful Lee Adler at the Wall Street Examiner who unscrambles the Bureau of Labor Statistics seasonal adjustments (SA) in the monthly Jobs Report, the December civilian labor force “did what it usually does” by laying off Christmas seasonal workers after the holiday. He believes, “In the next month or two, the SA data will return to trend with a combination of larger increases in the latest month and likely upward revisions for December.” He points out that the supposed 123,000 miss for new jobs grossly overstates any weakness in jobs growth. His non-seasonally adjusted data reveals consistent U.S. employment growth over the last twelve months of 1.6%, about the same level as the boom years from 2004 to 2007.

The mainstream media has been trained over the last five years to expect the Federal Reserve to immediately try to artificially stimulate the economy at the first sign of employment weakness by increasing its purchase of bonds. Referred to as “quantitative easing,” the Fed’s goal has been to inflate asset prices by driving down the cost of speculating on real estate, stocks, and commodities.

However, the Federal Reserve began trimming its “quantitative easing” bond purchases last month over concerns that its actions may be recreating the type of asset price bubbles that burst in 2008 and caused widespread losses for small investors. Rapidly growing corporate profits have been driving a bull market in stocks since March of 2009, but it was only in 2013 that small investors began pouring into the equities. According to data compiled by the Investment Company Institute, mutual funds and exchange traded stocks took in about $162 billion in 2013, the most since 2000. This tsunami of cash drove the S&P 500 stock price index up 29% last year, beating bond investment returns by the widest spread since at least 1978. Small investors have moved from less than 40% of their investments in stock to over 70%. This binge was paid for by spending their cash reserves which fell from 40% to just 15%.

The Fed knows that this type of speculative enthusiasm by small investors is often seen just before market crashes.

Barack Obama in his 2009 inaugural speech said, “The question we ask today is not whether our government is too big or too small, but whether it works.” The answer according to Rasmussen polling of likely voters is that, after five years of the President’s bold deficit spending, more voters believe the United States is heading in the wrong direction than when George W. Bush was President.

Approximately 51% of voters believe that the President is too hostile toward small business, while 70% believe government and big business collude in crony capitalism against workers and consumers. The percentage of Americans describing themselves as economically conservative has risen from 40% when the President was elected to 46% today. The percentage of economic liberals who support big government is unchanged at just 20%.

A couple of months ago on ABC’s This Week with George Stephanopoulos, the host cited a recent University of California, Berkeley study, called “Striking It Rich,” that documented that 95% of United States income gains from 2009 to 2012 went to the top 1% of its earning population. Cornered by the usually adoring Stephanopoulos, the President was forced to agree that during his Presidency the “top 1% incomes grew by 31.4%, while bottom 99% incomes grew only by 0.4%.” Obama tried to spin the question by adding, “The folks in the middle and at the bottom haven’t seen wage or income growth, not just over the last three, four years, but over the last 15 years.” However, the President had no answer when it was pointed out that income inequality is 50% higher during his administration than during the Bush administration.

I believe the main reason behind the dissatisfaction with Obama’s big-government liberalism is that despite a robust 9% gain in American worker productivity since 2008, American workers understand that their wages after inflation actually fell by 1%. Economists refer to the phenomenon of a nation’s workers losing ground to inflation and failing to be rewarded for productivity gains as “internal devaluation.” This type of worker pain has been rampant in Portugal, Ireland, Italy, Greece, and Spain, a wretched group of countries often referred to as the “PIIGS” of the European Union.

President Obama said at his 2008 campaign speech in Berlin, Germany, “This is the moment when we must build on the wealth that open markets have created and share its benefits more equitably.” Five years of President’s big government deficit spending has made the wealthy share a lot more wealth and caused American workers to suffer the same type of “internal devaluation” workers in the PIIGS are suffering. As recent polls demonstrate, American voters are learning a painful lesson about the negative consequences of deficit spending and are now solidly against big government.

Obama’s use of executive power faces reckoning at Supreme Court

The boundaries of executive power of the president are at stake Monday as the Supreme Court considers whether President Obama...