BEIJING — Filthy emissions from China’s export industries are carried across the Pacific Ocean and contribute to air pollution in the Western United States, according to a paper published Monday by a prominent American science journal. 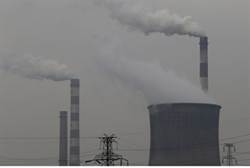 The research is the first to quantify how air pollution in the United States is affected by China’s production of goods for export and by global consumer demand for those goods, the study’s authors say. It was written by nine scholars based in three nations and was published by Proceedings of the National Academy of Sciences, which last year published a paper by other researchers that found a drop in life spans in northern China because of air pollution.

The latest paper explores the environmental consequences of interconnected economies. The scientists wrote that “outsourcing production to China does not always relieve consumers in the United States — or for that matter many countries in the Northern Hemisphere — from the environmental impacts of air pollution.”

The movement of air pollutants associated with the production of goods in China for the American market has resulted in a decline in air quality in the Western United States, the scientists wrote, though less manufacturing in the United States does mean cleaner air in the American East.

Jintai Lin, the lead author of the paper, said in an interview that he and the other scientists wanted to examine the transborder effects of emissions from export industries to look at how consumption contributes to global air pollution.

“We’re focusing on the trade impact,” said Mr. Lin, a professor in the department of atmospheric and oceanic sciences at Peking University’s School of Physics. “Trade changes the location of production and thus affects emissions.”

Powerful global winds called westerlies can carry pollutants from China across the Pacific within days, leading to “dangerous spikes in contaminants,” especially during the spring, according to a news release from the University of California, Irvine, where one of the study’s co-authors, Steven J. Davis, is an earth system scientist. “Dust, ozone and carbon can accumulate in valleys and basins in California and other Western states,” the statement said.

Black carbon is a particular problem because rain does not wash it out of the atmosphere, so it persists across long distances, the statement said. Black carbon is linked to asthma, cancer, emphysema, and heart and lung disease.

“Los Angeles experiences at least one extra day a year of smog that exceeds federal ozone limits because of nitrogen oxides and carbon monoxide emitted by Chinese factories making goods for export,” the statement said.

Using a modeling system called GEOS-Chem, the scientists estimated that in 2006, sulfate concentrations in the Western United States increased as much as 2 percent, and ozone and carbon monoxide levels also increased slightly because of the transportation of pollutants from emissions that resulted from the manufacture of goods for export to the United States. Because the Eastern United States has a much denser population, the outsourcing of manufacturing to China still resulted in “an overall beneficial effect for the U.S. public health,” even if Western states suffered, the scientists wrote. 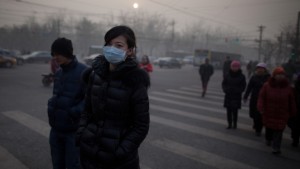 The amount of air pollution in the Western United States resulting from emissions from China is still very small compared with the amount produced by sources in the United States that include traffic and domestic industries.

The study’s scientists also looked at the impact of China’s export industries on its own air quality. They estimated that in 2006, China’s exporting of goods to the United States was responsible for 7.4 percent of production-based Chinese emissions for sulfur dioxide, 5.7 percent for nitrogen oxides, 3.6 percent for black carbon and 4.6 percent for carbon monoxide.

The interdisciplinary research project was begun two and a half years ago by scholars in Britain, China and the United States. The group included economists as well as earth and environmental scientists. The methodology applied various analyses and modeling to the Chinese economy and to the earth’s atmosphere and weather patterns.

The scholars who gave emissions estimates for China’s export industries, a significant part of the country’s economy, looked at data from 42 sectors that are direct or indirect contributors to emissions. They included steel and cement production, power generation and transportation. Coal-burning factories were the biggest sources of pollutants and greenhouse gases, which contribute to global warming.

In recent years, scholars have been studying the impact of China’s total emissions on global air pollution and warming. Residents of nations in the path of winds carrying pollutants from China have grown alarmed at what they believe to be deteriorating air quality in their countries because of that pollution. In Japan, for instance, an environmental engineer has attributed a mysterious pestilence that is killing trees on Yakushima Island to pollutants from China.

Alex L. Wang, a law professor at the University of California, Los Angeles, who studies Chinese environmental policy, said after reading the new paper: “This is a reminder to us that a significant percentage of China’s emissions of traditional pollutants and greenhouse gas emissions are connected to the products we buy and use every day in the U.S. We should be concerned, not only because this pollution is harming the citizens of China, but because it’s damaging the air quality in parts of the U.S.”

Exports accounted for 24.1 percent of China’s entire economic output last year, down sharply from a peak of 35 percent in 2007, before the global financial crisis began to weaken overseas demand even as China’s domestic economy continued to grow. The 2013 number takes into account economic data that was released on Monday.

Economists caution that this does not mean that a quarter of the economy was dedicated to producing goods for exports, since China still does a lot of reprocessing instead of making exports entirely itself.

But the proportion of China’s exports that are made in China has risen steadily in recent years as many companies move more of their supply chains, instead of just having final assembly work done here. So the overall percentages of economic output might not by themselves be fair indicators of the importance of exports to the Chinese economy.

The United States, which does include goods briefly transiting Hong Kong in its trade figures with mainland China, has shown even larger American trade deficits with China for many years, because Chinese companies use Hong Kong heavily for exports but much less for imports.

In Case You Missed It:  This Didn’t Age Well… CDC Chief Says There Will Be No Forced Federal Vaccine Mandates
Posted in Financial and tagged China, Made in China, paci, United Socialist States of America.

The Deputy Defense Minister, MK Danny Danon (Likud-Beytenu), has penned an article in the US-based Politico website that appears to...