The Islamic Waqf, which supervises the Temple Mount, Judaism’s holiest site, has issued a pamphlet that makes new claims regarding the Mount – arguing, among other things, that King Solomon was a Muslim and that there is no Jewish connection to either the Temple Mount or the Western Wall (Kotel). 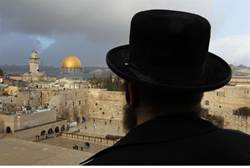 Rabbi Chaim Richman of the Temple Institute supplied Arutz Sheva with a copy of the pamphlet, which is currently being distributed to visitors to the Al-Aqsa Mosque and the Temple Mount.

In one section, titled, “Al-Buraq Wall and NOT the Wailing Wall,” the pamphlet teaches, “Al-Buraq wall is part of the western wall of the Al-Aqsa mosque.” The pamphlet goes on to link the wall to Islam, stating that it is known as the site where Mohammed “tied his winged steed, Al-Buraq.” (According to Islamic legend Muhammed did not die but flew to heaven on a winged horse called Al-Buraq.)

“Jews and some Christians, while falsely claiming it is part of their so-called ‘Temple,’ have made a ritual of standing in front of it, and wailing over the power they say was lost to Muslims. Despite the lack of a shred of proof to support these claims, they have turned it into a Jewish shrine since occupation in 1967, and have been conducting so-called archaeological excavations beneath it… in preparation for laying hands over the whole Mosque,” the pamphlet continues.

The Temple Mount is Judaism’s holiest site, and is widely recognized as the former site of the biblical Temple. The Mount is also the site of the Al-Aqsa Mosque.

The “informative” pamphlet is full of “utterly ludicrous, Kafkaesque lies,” Richman said. He noted that guidebooks to the holy site published by the Waqf in 1925, and again in 1950, recognized the site’s Jewish history, including the existence of the Temple built by King Solomon.

The updated pamphlet denies historical evidence that the Biblical King Solomon ever built a Jewish Temple, offering the following argument as proof: “Solomon was just another prophet of Islam, and therefore, he could not have the authority to build a structure for the worship of any other god but Allah.”

In a section titled “Marwani Prayer hall and NOT Solomon’s Stables” the claim that King Solomon was Muslim was reiterated.

“Solomon – peace be upon him – was one of the prophets of Islam,” stated the pamphlet, which accused “Jews and crusaders” of referring to an underground chamber near the Temple Mount as “Solomon’s stables” in a deliberate attempt “to try to lead people into believing that the structure is part of the so-called ‘temple.’”

The pamphlet also repeatedly claimed the existence of Israeli schemes against the holy site. Regarding a continuation of the Western Wall – which the pamphlet claimed as a Muslim site called “Ribat al-Kurd” – the pamphlet warned, “Occupation authorities still endanger this and other parts of Al-Aqsa Mosque.”

Rabbi Richman, a long-time Temple Mount activist, noted that the Waqf’s outrageous claims could indicate success in the battle for Jewish rights at the holy site.

“The Muslim Waqf is terrified by the great increase in Jewish visits to the Temple Mount, and by the successful media campaign that the Temple Institute has waged in the international media clearly demonstrating the centrality of the location and its importance to the Jewish people,” he explained.

“In other words, we are winning, and they are trying even harder to undermine Jewish connection to the Temple Mount” as a result, he continued.

The latest anti-Jewish incitement regarding the Temple Mount follows a series of recent incidents in which Jewish visitors faced discrimination.

Jews were barred from bringing dried fruit onto the Mount last week, apparently due to fear that they would celebrate Tu Bishvat, and this week a religious Jewish woman was told she could not enter the site because her dress did not conform to Muslim standards of modesty.

On Monday, it was reported that Waqf officials have been violating Israeli laws to preserve antiquities by planting trash cans atop the Mount.

Jewish activists have countered with a push to end rules that discriminate against Jews at the holy site. Among other things, MKs from the Jewish Home party have put forth a bill that would allow Jews to legally pray at the site for the first time since 1967.

Another group of Americans is discovering that President Obama’s promise that “If you like your health care plan, you can...