Wounded Syrian woman: “We hesitated coming to Israel, because we were taught to hate it. We were taught this is a brutal enemy state, but we learned that reality is different. People here have a conscience. Our enemy is in Syria, not in Israel.” 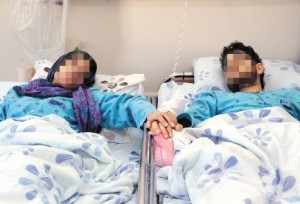 “If only we could stay here.” The Syrian couple at Poriah Hospital, Friday | Photo credit: JINI

Israel Defense Forces troops brought a wounded Syrian couple to Poriah Hospital near Tiberias Thursday night. The couple, residents of the embattled town Daraa, arrived with gunshot wounds in their legs. The male is 27 years old and his wife is 23 and in the early stages of pregnancy.

While the two did not have life threatening wounds, the two have been through an immense amount of duress recently: Two months ago, the couple lost their daughter two weeks after she was born. “Because of the gunfire and the siege on our town in the Daraa area, we were left with no choice but to deliver the child at home — and the medical condition of my baby deteriorated,” the woman told Israel Hayom. “All our pleading at the [Syrian] army checkpoint to go to the hospital did not help. We went back home and our daughter died there.”

Eight days ago, the couple was struck with another tragedy. Their village came under attack, “artillery bombardment, gunfire, and planes bombing from above,” the woman said. “In the evening my brother came and took us, my mother and two other wounded people and we tried to flee the village. During our exit from the village we were fired on by the army and my brother was killed before my eyes. We managed to escape back to the village and were treated in a field hospital. But the wounds got worse — until my cousin took us to the border and we got into Israel for treatment,” the woman said. Her brother, 19, fought with rebels trying to topple Syrian President Bashar Assad’s regime.

Currently the couple remains hospitalized, both in the same room. The woman is struggling with being away from her family, but admitted that she did not expect such friendly treatment from her enemy. “We were surprised by the treatment and dedicated medical care we got in Israel,” she said. “We hesitated coming to Israel, because we were taught to hate it. We were taught this is a brutal enemy state, but we learned that reality is different. People here have a conscience. Our enemy is in Syria, not in Israel. If only we could stay here.”

In Case You Missed It:  9-11-2001 NEVER FORGET
Posted in Israel and tagged Anti-Semitism, Islam, Israel, Syria.

BEIJING — Filthy emissions from China’s export industries are carried across the Pacific Ocean and contribute to air pollution in...