Germany’s Bavaria state signaled Wednesday it would not seek to prevent the publication of an annotated version of Adolf Hitler’s manifesto “Mein Kampf” in an apparent about-face, according to AFP.

Amid a debate over academic freedom and a back and forth over whether to pursue the project, Bavaria indicated that it would not try to stop a historical institute from bringing out a version of the book with scholars’ commentary.

But the southern state stressed in a statement that it would seek to prevent any other full or partial publication of the 1924 book in which Hitler railed against the “Jewish peril”.

Bavaria holds the rights to “Mein Kampf” (My Struggle) because Hitler was officially a resident of Munich when he died, but those rights expire at the end of 2015.

Since World War II, the state has blocked any reprints of the book. This changed two years ago, when the German state announced plans to publish in early 2016 an annotated version for academic purposes and to help “demystify” the text.

However, that seemed in doubt after the Bavarian state government changed course in a surprise move in December, insisting that the “seditious” book must stay off the market after complaints from Holocaust survivors.

Several Bavarian legislators complained over the decision to torpedo the academic edition, a project the state parliament had supported, and which had already cost 500,000 euros ($688,000) in state funding.

The former head of the Central Council of Jews in Germany, Charlotte Knobloch, told national news agency DPA in December that she backed efforts to stop any reprints of a book that was “steeped in hatred and contempt for humanity”.

She said the text was “one of the most inflammatory works ever written in this country” and – even though it is available abroad – in Germany it “must never be legally allowed to sneak back into the hands and minds of the people”. 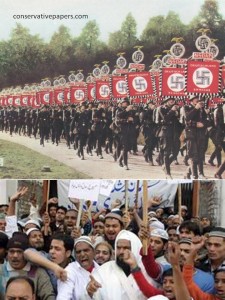 But Bavaria said in its statement Wednesday that the institute’s academic freedom would remain “untouched” and it could bring the annotated version out in its own right.

“The freedom of science to confront the topics which, in its view, are necessary is thereby not restricted,” Bavarian state minister for education Ludwig Spaenle said in the statement.

Hitler started writing “Mein Kampf” in prison after his failed putsch of 1923. After his rise to power, millions of copies were published. From 1936, the Nazi state gave a copy to all newlyweds as a wedding gift.

Bavaria’s decision comes less than a week after the hate-filled text became an Amazon bestseller, sparking concerns of an even greater escalation of anti-Semitism worldwide. The book is particularly popular in the Arab world, along with the infamous anti-Semitic forgery “The Protocols of the Elders of Zion”.

Most political indicators point to a terrible 2014 for American leftism amidst an auspicious resurgence of conservatism throughout the nation....